Home World Taliban: We Will Respect Women’s Rights According To Sharia 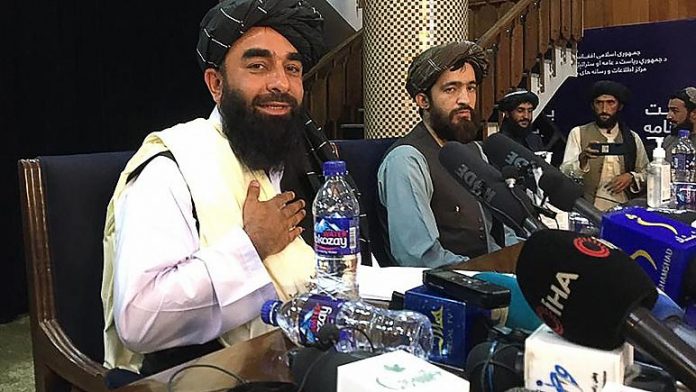 Taliban Spokesperson Zabibullah Mujahid said, “We don’t want enemies inside or outside.” said. Stating that women can go to work and receive education, the spokesperson of the Taliban said that women can be active in society within the framework of Sharia.

Zabibullah Mujahid is committed to providing Afghan women with their rights on an “Islamic basis” and stated that there will be no discrimination against women.

“We are not seeking revenge”

Zabibullah Mujahid said, “No one will harm you. No one will knock on your door.” said.

“The media will work independently”

Mujahid noted that they want all media outlets to continue their work freely and independently, that there will be no threat to any country from Afghanistan, and that the embassies in the country are completely safe.

The headlines from the speech of the spokesperson of the Taliban are briefly as follows:
“The pursuit of freedom and independence is the legitimate right of every nation”

“We know that we have gone through very difficult times and crises, and we have made many mistakes in favor of the invaders.”

“We forgive everyone, everyone who fought against us. We do not want to repeat any conflict, any war, and we want to eliminate the factors of conflict”

“We do not have any enmity or enmity with anyone, the hostilities have ended and we want to live in peace. We do not want any internal enemies and any external enemies.”

In the meantime, the US Department of Defense announced that Hamid Karzai International Airport is safe, that they plan to take off an hourly plane within 24 hours and evacuate between 5,000 and 9,000 people daily from Afghanistan.

Speaking to reporters at the Pentagon regarding the evacuations in Kabul, Major General William Hank Taylor said that more than 4,000 US soldiers will be in Kabul today.

Stating that Hamid Karzai International Airport is safe at the moment, Taylor said, “The Turks continue to help with the security and operation of the airport.” said.

Stating that the airport is currently open for military flights and a limited number of commercial flights, Taylor said they aim to lift an aircraft per hour within 24 hours and evacuate between 5,000 and 9,000 people daily from Afghanistan.

Pentagon talks to Taliban in Kabul

Major General Taylor, emphasizing that there has been no attack or threat from the Taliban so far, said, “Our commanders at the airport are in contact with the Taliban commanders outside the airport in the field, we are meeting with them.” he said.

Pentagon spokesman John Kirby said the evacuations from Kabul will continue until August 31.

The process of Taliban domination of the country

Within the framework of the peace agreement reached between the USA and the Taliban in February 2020, the process of withdrawing international forces from Afghanistan began this year.

While the agreement stipulated not to attack foreign forces, it did not make provision for the actions of the Taliban against Afghan security forces.

Continuing the negotiations with the Afghan government in Doha, the Taliban have simultaneously dominated many districts and provincial centers in Afghanistan with violent attacks since June.

Besieging the capital Kabul, the Taliban took control of the city without conflict after President Ashraf Ghani left the country on 15 August.