Home World Taliban Announced Their Promises One By One, After The Victory In Afghanistan 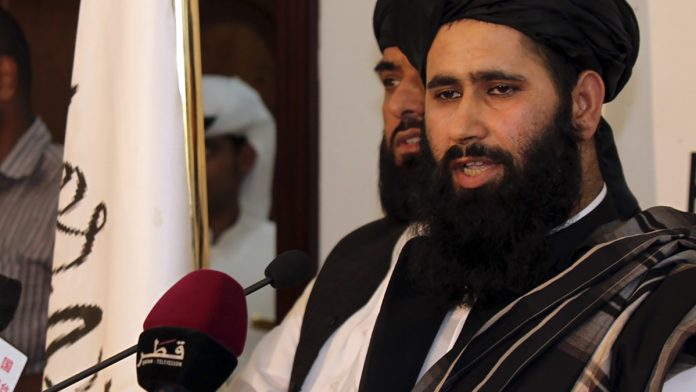 Taliban Spokesperson Zebihullah Mujahid held the first press conference in Afghanistan’s capital, Kabul, with the participation of local and foreign press members. Mujahid said that they will not interfere with the media, but will treat women within the framework of Sharia provisions.

Taliban Spokesperson Zebihullah Mujahid held the first press conference after the Taliban took control of Afghanistan’s capital, Kabul, and said, “As of today, we announce to everyone who stands against us in Afghanistan that our hostility has ended.”

Mujahid said that they put an end to the 20-year occupation and issued a general amnesty to prevent conflict in Afghanistan.
Stating that they are not seeking revenge, Mujahid said, “We too have suffered from this war. “We want Afghanistan’s security and peace,” he said.

Mujahid said, “We will not interfere with the media. They can continue their broadcast. It doesn’t matter who worked where before.

We will not seek vengeance, nor will anyone’s house be broken into. I assure you about this. “We will not take revenge on anyone who has fought with us or been against us,” he said.

WOMEN WILL LIVE ACCORDING TO SHARIA

Saying that women are a part of society, Mujahid said, “Women will be treated according to Islamic Sharia and their rights will be determined according to Sharia. Their presence in society is important.”

Mujahid said that women can go to school and work in schools and hospitals.

FOREIGN MISSIONS WILL BE PROTECTED

WE HAVE NO ALLIES

Stating that Afghanistan’s lands will not be used for attacks against any country, Mujahid said, “We are in talks to establish a strong Islamic government in Afghanistan. “We have good relations with Pakistan, Russia, and China, but we have no allies and we are not part of any bloc,” he said.

WILL HE DONATE TO YOU IN AFGHANISTAN?

IFA 2021 will be organized as a full-scale physical event