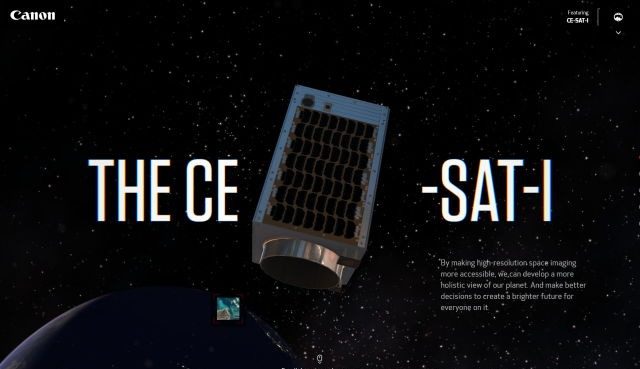 Instead of introducing a new product at CES 2021, Canon made a different choice. The company announced a website that makes it possible to take photos from space. With this interactive website, it will be possible to take pictures of the earth from the CE-SAT-1 satellite with a slightly modified Canon 5D Mark III DSLR camera. However, it should be noted that these photos will not be taken in real time.

The CE-SAT-1, the size of a barrel, was launched into space in 2017. 40 cm on the satellite. There is a 5D Mark III DSLR camera built into the Cassegrain type telescope. The satellite, which orbits a 600 km long orbit, also has a PowerShot S110 camera for larger frames.

The interactive demo makes it possible for users to take satellite photos from different locations. Each photo includes location and altitude information. However, as mentioned above, real-time photos are not taken here and pre-captured frames are used.

If photographs were taken live, CE-SAT-1 would have to orbit the Earth in 1.5 hours at almost 275000 kilometers per hour. Canon’s work helps to gain insight into the capabilities and resolution of CE-SAT-1.

Canon had tried to send the CE-SAT-1B satellite into orbit last summer, after the CE-SAT-1 satellite. However, the RocketLab’s Electron rocket carrying the satellite disappeared shortly after the launch and the mission failed.