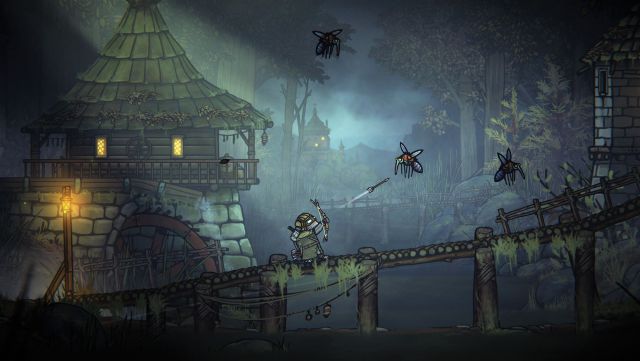 Tails Of Iron: A 2D RPG action adventure told like a medieval fantasy fable that exudes the essence of Souls; we reviewed Tails of Iron for PC and consoles. There are times when, suddenly, high-quality video games appear that have hardly made any noise during their development, especially in the independent field. And this is the case of Tails of Iron, a new action RPG in two dimensions that enters through the eyes on a visual level -and in what way- and convinces by its challenging gameplay, with fighting in the purest Souls style, although with a friendly story development that is enjoyed from beginning to end. The work of the small British studio Odd Bug Studio, this new bet on the fable as a video game immerses us in a dark medieval fantasy world populated by anthropomorphic rats that see their domains threatened by the invasion of frogs with very bad fleas; Let’s see in our analysis if the journey of learning and overcoming the young heir to the throne Redgi arouses the interest of fans of Soulslike, a video game that is already available on PC, PS4, Xbox One, PS5, Xbox Series X | S and Nintendo Switch .

Tails of Iron takes us to the so-called Kingdom of Rats, a gloomy and gloomy medieval fantasy world that once breathed progress and prosperity but has fallen to the incessant invasion of the evil Green Wart, leader of the ruthless clan of frogs. As the young and inexperienced heir Redgi, we must restore peace to our home, ending the Batrach threat, rescuing our brothers and restoring our kingdom. And the task will not be easy; absolutely.

In essence, the new Odd Bug Studio bets on a 2D action RPG development that distills certain characteristics common to From Software’s work, but that does not deny its own personality, offering tough and challenging combats, yes, at the same time as a development of the adventure that invites us to continue exploring, improving and discovering secrets and improvements for our graceful protagonist. The game also offers certain sections of platforms and even a touch of metroidvania, albeit in a very subtle way. Yes, we will have to return to points where we could not access before, although the progress of the adventure is quite guided; in certain sections perhaps too much.

Although the central axis of Tails of Iron is combat, demanding, with really difficult challenges that we can only overcome through learning, patience and a lot of cold blood; It does not reach the levels of other much more complicated works, but it has its crumb, without a doubt. And it is that during our journey we will die many, many times, since any false step will be punished with the most brutal of deaths. In this, our ability at the controls will have a lot to say, although finding the ideal build for each moment will be crucial to emerge successfully from the toughest confrontations.