Home Entertainment Taeyong from Girls’ Generation Spills Tea on How to Behave in The... 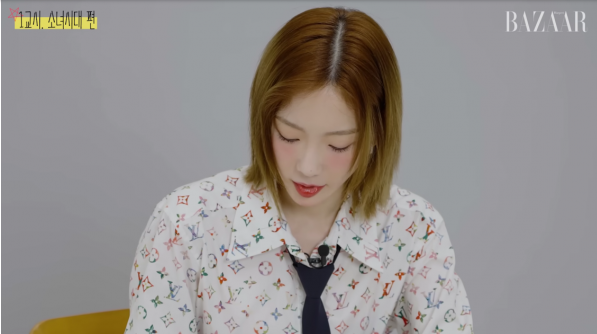 Like her label colleague NCT Mark, Taeyong from Girls’ Generation will be featured in the November digital release of Harper’s Bazaar Korea.

While Mark from NCT flaunts his collaboration with Polo Ralph Lauren on the cover of his magazine, Taeyong flaunts Louis Vitton products at his photo shoot. Indeed, SM Entertainment artists are associated with elegance and class.

As part of the promotion of Taeyong’s digital release, the official YouTube channel Harper’s Bazaar Korea released a video on October 20, 2022, addressed to newcomers to the K-pop industry.

The video uses a concept in which Taeyong is a young schoolgirl who came to learn about the “art of women’s groups”.

With her 15-year immersion in the K-pop industry, Taeyong is considered one of the pillars that paved the way for the popularization of the Hallyu wave. Based on her experience as the leader of the Girls’ Generation female group and a soloist, Taeyong spoke about her tips on how to survive in a K-pop idol career.

The main vocalist carried a bag and a book with her as props to enhance the educational atmosphere in the video. Surprisingly, the book’s props looked like a slam book as it contained some basic information about Taeyong, such as her entertainment agency, debut date, height and blood type.

Cheering up the class, Taeyong was asked about the “three basic requirements necessary to become a K-pop idol.” For someone like Taeyong, who has been working in K-pop since the second generation, such questions are best asked to veterans like her, since she has a lot of experience to share.

According to the leader and main vocalist, the K-pop idol should have a “positive mindset”, be “multi-talented” and should be “fashionable”.

Then, in the list of questions, Taeyong was asked to finish the sentence: “Be careful with ____ to last as a group for a long time.” Activating her inner legend, Taeyong replied, “Temptation.”

When asked how she solves problems with her participants, Taeyong mentioned that the key point is asking for a conversation.

Delving into personal questions, Taeyong was asked about the three advantages and disadvantages of living in a dorm. She mentioned that the benefits include “fun,” “never boring,” and “better teamwork.” At the same time, the disadvantages are “the small size of the room”, “the infinity of reasoning” and “you have to label your things with your name.”

When asked about the rehearsals, the vocalist of “INVU” answered as follows:

Since Taeyong has experienced the best of both worlds as a band member and soloist, she recommends drinking vitamin B for endurance and memory.

Are you a beginner K-idol? We hope that you have written down important notes from the Taen pointers.

How to import financial data from Google Finance to Excel