Home Celebrity Taeyang and Min Hyo Rin are already parents, so they welcome their... 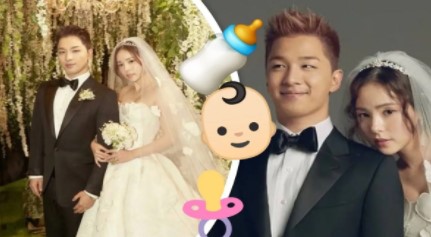 Taeyang and Min Hyo Rin officially form their family with the birth of the baby they were expecting. YG Entertainment issues a statement regarding the son of the idol and the actress.

Although many idols do not have relationships, lately we have seen cases of artists in K-Pop who decide to publicize the fact that they have a partner and that they are expecting a baby, BIGBANG member Taeyang and Min Hyo Rin have been in a relationship since. years ago and it was known to many fans.

They both have a beautiful love story, since they met and started dating until they confirmed their relationship and made it public; In 2018 they celebrated their wedding since then they took their marriage without any scandal and are one of the most beloved couples in the South Korean entertainment industry.

Last September, Taeyang and his wife Min Hyo Rin announced that they were expecting a baby, they would soon become parents, and although they only wanted to announce the news to fans and keep the motherhood moments to themselves, their fans rejoiced for this step in the life of the idol and the actress.

Well, by then the pregnancy was already advanced because today it has been announced that Taeyang and Min Hyo Rin are already parents, their baby has bequeathed to the world and they receive him with happiness.

YG Entertainment, the agency that manages Taeyang’s career, announced the South Korean information company Newsen that Taeyang and Min Hyo Rin are already parents and recently welcomed their baby, surely both are enjoying this stage of their lives that they experience for the first time.

The idol and actress’s family has grown, and fans are more than happy to hear that Taeyang and Min Hyo Rin’s baby came into the world very healthy.

What Gender Was TAEYANG AND MIN HYO RIN’S BABY?

According to the information, Taeyang and Min Hyo Rin had a boy, awwww! The important thing is that he was born well and healthy and now both will face new adventures together with their son, what a thrill! Congratulations, one more time.

BIGBANG fans Taeyang and Min Hyo Rin are already supporting the family and sending cute messages for the couple through Twitter with the hashtag ‘#WellcomeNewSun’ where we find the best wishes for both of them in this new stage.

Worst betrayals ever made on the BBC series