Home Entertainment T-Mobile RU VVL 6 vs OnePlus Nord N20 5G: what is worth... 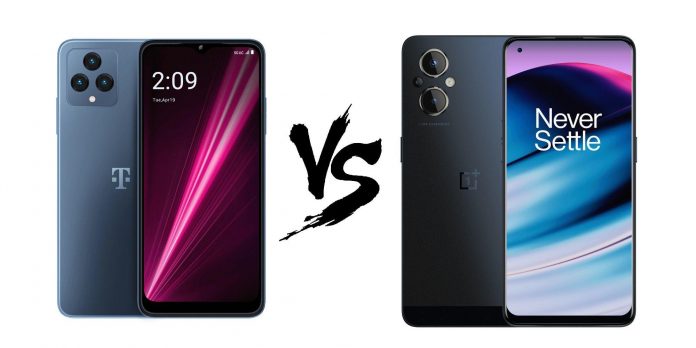 T-Mobile has announced REVVL 6 as one of two new budget 5G smartphones in the REVVL line of devices, but is it worth buying OnePlus Nord N20 5G? It is known that operators sell phones and tablets from different manufacturers, but some of them have products under their own brands that their customers can purchase. One of these operators is T-Mobile, which sells smartphones of its own brand under the REVVL brand.

T-Mobile announced the first REVVL smartphone in August 2017, and it had entry-level features at an ultra-affordable price of $125. A few months later, it was followed by REVVL Plus, which shared some key features with REVVL, but received a larger display and battery capacity. Since then, T-Mobile has continued to release new models, including the REVVL V Plus 5G for $200, which was announced in 2021.

The design of the new T-Mobile smartphone is partly inspired by the iPhone. It has a flat display, a curved frame, a triple rear camera and a plastic case. REVVL 6 is available in one color scheme — China Blue. The OnePlus phone also borrows some design elements from the iPhone. Its display is as flat as its frame. However, its triple rear cameras are separated. It is also made of plastic and is available in a single color variant called Blue Smoke. Neither of the two phones has water protection.

The REVVL 6 has a 6.5-inch teardrop-shaped display for a 5-megapixel front-facing camera. This is slightly larger than the 6.43-inch display of the Nord N20, which has a 16-megapixel selfie camera in the upper left corner. In addition, T-Mobile has chosen an HD+ LCD display to lower the cost, but it can’t compare to the AMOLED FHD+ Nord N20 panel. Despite these differences, both phones have a refresh rate of 60 Hz. Inside the REVVL 6 is a Dimension 700 processor combined with 4 GB of RAM and 64 GB of expandable memory (up to 2 TB). On the other hand, the Nord N20 has a more powerful Snapdragon 695 processor, 6 GB of RAM and 128 GB of internal memory. It also has a microSD card slot to add an additional 512 GB of memory.

Both phones are equipped with triple rear cameras, but not only are they arranged differently, but their sensors also differ. The REVVL 6 main camera is equipped with a 13-megapixel camera paired with a 2-megapixel depth camera and a 2-megapixel macro camera. In contrast, the Nord N20 has a 64 MP main camera with an aperture of f/1.79, a 2 MP macro camera and a 2 MP monochrome camera. On two phones, buyers will find one speaker, an audio jack and a USB-C port for charging. Both phones also have a fingerprint scanner, but on the Nord N20 it is hidden under the display, and on the REVVL 6 — under the red power button on the side. They also both support face unlock. T-Mobile and OnePlus have chosen the same 4500 mAh battery capacity, but the Nord N20 will charge faster when it’s low as it supports 33W fast charging, unlike the REVVL 6, which charges at 15W. OnePlus also gets an extra point for including a charger in the kit, while those who buy the REVVL 6 will have to provide their own charger. REVVL 6 runs Android 12 with a user interface close to standard Android and comes with several pre-installed Google apps and services, while OnePlus ships the Nord N20 with OxygenOS based on Android 11. Although T-Mobile does not say how many OS updates REVVL 6 will receive, the Nord N20 has the right to one OS update, bringing it to Android 12. OnePlus also promises three years of security updates. At $169, the REVVL 6 is very cheap, but this low price is achieved due to a low-resolution display, a mediocre camera matrix and a weak processor. It also doesn’t have a charger.

By contrast, the $282 Nord N20 ($299, unlocked) justifies its price with a sharper screen, a better camera, more RAM and memory, faster charging and a bundled charger, but disappoints with its outdated Android version. Nevertheless, REVVL 6 can be enough for everyone who wants to pick up an inexpensive 5G smartphone for a child or as a second smartphone. For those who want a better device than the REVVL 6, but don’t want to shell out almost $300 for the Nord N20, there is the TCL Stylus 5G. It’s available on T-Mobile for $258, and buyers get a 6.81-inch FHD+ screen, a 50-megapixel quad-core camera, a smaller 4000mAh battery that charges 18W faster (charger included), Android 12, and a built-in stylus.