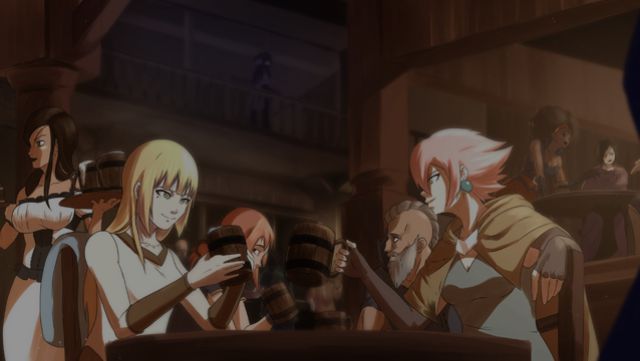 We analyze Sword of the Necromancer, an RPG in the dungeon explorer style, with some roguelike element and a very deep story.

It is likely that in May of last year you heard about Sword of the Necromancer, its success on the Kickstarter platform attracted a lot of attention, since from its initial goal of 15,000 euros they managed to raise more than 200,000 euros. Perhaps that caused an increase in expectations in finding a very varied independent video game, with greater content and a mechanics more adapted from a dungeon-crawler and a roguelike, but its content is more remarkable in the narration, in its visual style and in certain points of the gameplay that make it entertaining. It has been developed by Grimorio of Games, also responsible for Super Hyperactive Ninja, and produced and published by JanduSoft, both based in Barcelona. On January 28, it was released on the Steam, PlayStation 4, Xbox One and Nintendo Switch platforms. We will begin a very deep and dramatic story. We will have to wield the Necromancer’s Sword, turn our enemies into allies and help our friend to bring her back from the dead as soon as possible.

Legend has it that, deep in the mountains, a heretic decided to violate the will of the gods in order to achieve eternal life. The heretic managed to perform his aberration successfully and among the tools he created, one was the Necromancer Sword. After this legend we move to the present. Tama is a former bandit tasked with escorting the priestess Koko on her pilgrimage across the continent. During her journey, Koko dies, and Tama decides to take her corpse to the Necromancer’s crypt, where many legends say that this power dwells there that can resurrect the dead. Filled with despair, Tama will enter the dungeon with the goal of obtaining the forbidden power of necromancy and using it to recover Koko, ignoring each and every danger that lurks in the shadows.

The weight of the narration and the story that Sword of the Necromancer presents is without a doubt one of the strongest characteristics of this game. His story is fully dramatic and very deep with a love story, many feelings and a plot that will make you be hooked to know everything that has happened. And because? Well, because the game will not tell you the whole story from the beginning, and it is that throughout this adventure we will unlock memories. These memories will be represented by some well-designed kinematics of anime drawings, with voices in English and translation into Spanish, which will tell us much more about their story, their adventure and will help us to know and understand our protagonists Tama and Koko much more. . Of course, if you want to share this story with a friend, the game allows you to share screen cooperative with Remote Play Together, but unfortunately for us this option did not work for us (we know that it has worked in the beta and according to which controller configurations it works or not, so we’ll wait to keep testing it later).

Google Opened the Cloud Healthcare API to the Public