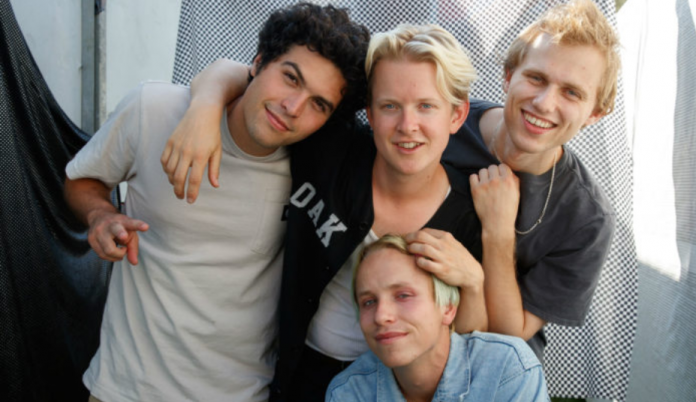 SWMRS have released a statement regarding sexual harassment allegations made against their former drummer Joey Armstrong.

In a statement posted to Instagram in July 2020, Lydia Knight, singer of the Los Angeles band The Regrets, detailed her experience with Armstrong (son of Green Day frontman Billy Joe Armstrong) during a one-year relationship that began in mid-2017.

Knight’s message says that the relationship began when she was 16 and ended “right before my 18th birthday.” Armstrong was 22 at the time.

“Every time we took a step sexually, it was because he wanted to, and made it clear, either by putting my hand on his crotch, shaming me for saying I was uncomfortable, gaslighting or ignoring me when I didn’t give my consent,” the part read Knight’s post.

She explained that she made the decision to make the statements publicly after SWMRS “published an incredibly hypocritical statement on social media,” adding: “This group’s delusional positioning of themselves as awakened feminists not only annoys me as a victim, but it’s complete nonsense, and it needs to be called out.”

Elsewhere in Knight’s statement, she wrote that it took her “years to finally realize that I am a victim of abuse.” She also accused Armstrong of using his “position of power” as a musician of a well-known touring band, with which he could control. “This dynamic of professional power has permeated all aspects of our relationship,” she said.

Knight added that she had spoken to Armstrong before sharing a statement online in which he “seemed very empathetic,” but that when she received a handwritten note written by him and delivered by his bandmate Cole Becker, Armstrong “did not respond to any insults, my age, his position in the authorities or anything sexual at all” in the letter.

Armstrong later responded to the claims in his own statement, which he posted on SWMRS’ official Instagram account.

“Although I disagree with some of the things she said about me, it is important that she be allowed to say it and that she be supported for what she said. I respect her immensely and fully admit that I let her down as a partner,” it says.

“I was selfish and didn’t treat her the way she deserved, both during our relationship and for two years after our breakup.”

Armstrong added, “I have apologized to her privately and I hope she can forgive me if and when she is ready to do so. I admit my mistakes and will work hard to regain the lost trust.”

Cole Becker and Max Becker from SWMRS published a video message in which the former read out an “open letter to our fans.” Cole said the pair were “going to support the band,” and confirmed that both Armstrong and Seb Mueller had left.

“First of all, I’m sorry it took so long,” Cole began. “It was hard to find the right words. The last time we really talked was more than two years ago. The world around you and me has closed down.”

Then the frontman told about the car accident of his bandmate and brother in 2019 and the subsequent recovery period. “It was against this background that my life changed again,” he continued.

“In July 2020, my friend and SWMRS drummer Joey Armstrong was accused of emotional abuse and sexual coercion by someone he dated years ago. They were different ages when they met; he was 22, she was 17. Nevertheless, the accusations came as a shock to me.

“Lydia was someone we considered a friend. When I first heard she was going to call Joey, I called her right away. I remember that Joey and she met a few months ago to discuss their relationship after the fact, and I thought everything went well. So I wanted to find out what had changed.”

Cole continued: “We talked twice and everything was going well until she covered my brother’s car accident and offered to post information about “Regrets” in our Instagram story so she wouldn’t make her accusations public. At this point, I had to move away from the situation.

“When she published her statement, I immediately saw that some details had been embellished to make it look worse than it actually was. I was here. I remember their brief relationship. I remember how he spent Mother’s Day with her family.”
The singer then challenged Knight’s claim that Armstrong forced her to keep their relationship a secret. “Everyone involved in their lives knew about it,” he said.

“I was also confused by the fact that they had never had sex, and yet many people started calling him a rapist. And to us as apologists for rape.”

Cole later said that it was “wrong” to get involved in the situation: “At the end of the day, it’s not my story, and I really didn’t want to discredit her story. But the discrepancies were too glaring for me to take her side and not his.

“I wasn’t going to judge my friend. Since we refused to condemn it, we were canceled. We started receiving death threats. Private information about our lives was accidentally passed on to people who felt betrayed by us. People have found all sorts of creative ways to tell us that we suck and they hate us.”

Cole continued: “If you were one of these people, I would understand. You believed that we were defending something, but here we seem to contradict ourselves by supporting our friend amid these accusations. People I considered friends started posting statements condemning our group.

“I remembered with horror how I had already participated in this madness several times from the other side. I thought I was using our platform for good. But, in the end, I became part of a culture that rewards violent behavior in the name of justice. And I only found out about it because of how cruel people were to us. We were flogged in the media.”

Regarding the band’s future, Cole said, “SWMRS is not breaking up, but the chapter of our lives is decisively closed. Joey and Seb left the band to pursue their personal lives. Max and I will support the band.

“After everything we’ve been through, it’s stupid to leave. He worked tirelessly on his recovery from the accident with the sole intention of playing rock music on stage again. Our band means a lot to us, and I think it means a lot to a lot of you, too.”

Cole then explained that he was “afraid to say anything” because he knew his thoughts on the situation were “controversial.”

“It doesn’t quite fit into the cultural binary of good and bad. And I was scared because I don’t want to fight anyone — that’s the last thing I want to do. But since it continues to interfere with our work, I have no other choice. It’s time to set a record.”

Anticipating the reaction of SWMRS fans to the statement, Cole said, “Some of you will hear this, and it won’t be enough. If so, you don’t have to listen to our music. I’m just trying to tell you the truth. I didn’t always do the right thing.

“But anyone who really knows me knows that I always try to treat people with respect and work with love. No matter how this letter finds you, we send you love, respect and gratitude. It has always been an honor for me to share our music with you.”

You can watch the statement in full in the video above. We have contacted Lydia Knight’s representatives for comment.