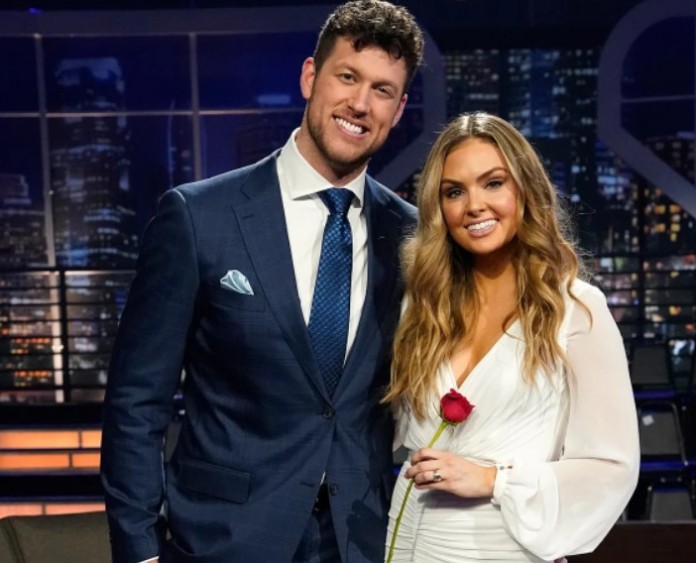 What doesn’t kill you, makes you stronger? Susie Evans has shared new details about how she and Clayton Echard handled recent cheating allegations.

“I’m a [wedding] videographer. I was working in California and just finished filming a wedding ceremony, and I’m getting all these tags and notifications on my phone,” the 29—year-old Virginia Beach native began on the “Talking It Out” podcast on Thursday, April. 14. “I open a couple and see this video, and everyone thinks, “Oh, it’s Clayton and Susie.” And there’s a TikToker who made a video that says… the most recent bachelor who is still with his girlfriend, she hooked up with him the night before. And she’s like, “I feel so sorry for the girl.”

Sasha Narang was a woman who went viral due to accusations of having an affair with the Bachelor star on April 8. While Evans told hosts Mike Johnson and Brian Abasolo that she had no doubts about the 28-year-old Echard, she went to Narang’s profile after TikToker claimed that she had sent a message to the “fiancee” of the man she spent the night with.

“I clicked on my messages and I have a message from her. And I’m like, “Oh, my gosh, that’s impossible.” Of course, at that moment my stomach, like, dropped, because I just thought: “What?” she explained. “I just couldn’t even understand Clayton of all people —I just sincerely trust him as a good person above all. And then I see a message from him. And he’s like, “Oh, my gosh, there are people who speculate on the Internet, like, this is crazy.” And we immediately communicate via FaceTime. …He’s at his brother’s apartment in Arizona. It’s like the day after she was supposedly with him.”

On Saturday, April 9, Echard quickly denied the allegations in Instagram Stories, citing evidence of his time at the gym in Arizona the night before. Although Narang initially doubled down and said she had proof, she apologized on Sunday, April 10, after viewing the surveillance footage.

“I want to start by saying that I’m very sorry for Susie and Clayton. I had a sincere impression that I was with him,” she said. “I really thought I was with him. Everything I said in this video was clearly a bit impulsive. And I shouldn’t have been so pushy and just assumed it was true without investigating, maybe further. And it’s completely on me. And I was completely wrong there. I shouldn’t have treated it the way I did. But then again, I was so under the impression that I thought I was doing the right thing. And I also want to emphasize that the whole reason I made this video was not with malicious intent. I asked myself if I was in [Susie’s] place, I’d like to know, and I thought she was engaged to him. If I were her, I’d like to know that my, you know, future husband is cheating on me with 22-year-olds in bars.”

During Evans’ interview on Thursday, Echard joined him and said he had advised TikToker to apologize.

“Although I wanted to, like, bury her in one aspect, I said, ‘You know what, she’s still human, and she’s still, like, under fire right now.’ We don’t want this girl to do something extreme,” said the former Bachelor. “So I just texted her, I said, ‘Delete your videos and apologize, like, this is the best thing you can do.’ And she did it. …I don’t want to doubt whether it was genuine. …She took a video and walked away from him. And that’s why I want to give her mercy.”

Scroll down to learn more from Evans and Echard:

According to Evans, Echard recognized the username of one of the women commenting on TikTok Narang.

“He found out the name of the person who interrupted him all season,” she explained. “It all comes down to two people who probably didn’t like Clayton.”

“She’s like, ‘I had the same relationship as you. …It hurt me, and I took advantage of it.” “Clayton is literally one of the most incredible people I’ve ever met, and he has great communication. It’s transparent. He’s so loyal and so honest.”

Evans added that she was “kind” to Narang “all the time,” but never believed that Echard cheated on her.

Cardi B: after the new Trump controversy, she plans to leave...

Harry Styles performed a surprise duet with Lizzo during the 2nd...