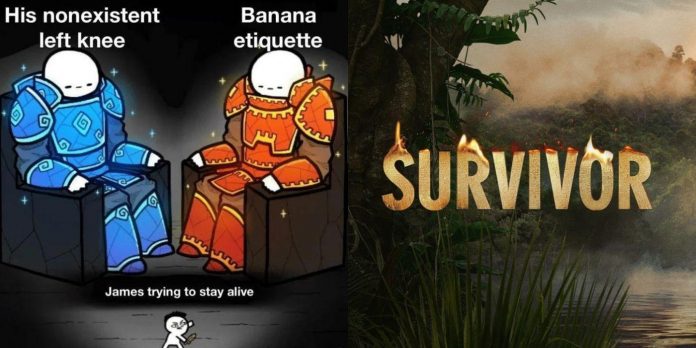 A new group of castaways is ready to hit the shores of Fiji in Survivor 43 on September 21st and fans are ready to welcome them onto their screens. Though fans have no way of knowing what twists, advantages, and social strategies will be introduced in the season, there is one thing that will certainly be shown: Camp life.

Life on a beach in Survivor isn’t easy, and the castaways are often forced to reckon with some struggles that might look ridiculous to fans watching at home. That’s part of why some fans have put together some memes to celebrate life on the island, and some of them showcase just what it feels like to live on a beach Survivor.

Part of the challenge for players who are more experienced with outdoor living is that they’re surrounded by players who have never touched grass in their lives. After all, even Cirie Fields, one of the fanbase’s favorite cast members, came to Survivor with a fear of leaves.

Yet, while experienced players and returnees often try to convince new castaways to help build the shelter and hunt for food, they’re often ignored. It’s just part of the premise of the show: Learning to get along with people who are entirely unlike one another. Sometimes it just doesn’t work.

While Boston Rob is one of the smartest Survivor players ever, it takes more than just being on the Brains tribe to make a player live up to his tactics. After all, Boston Rob was an incredible player who managed to control his tribe with brute force and strength of will. Many other castmembers following that archetype have appeared on the show since — to the detriment of their tribes.

After all, it isn’t easy trying to survive on an island with players that are desperately trying to control every aspect of camp life. It can make things feel stifling, even if it’s a proven strategy for victory. For castaways just trying to make it to another day, godfather archetypes are hard to cope with.

There’s no way to know how a season will go. J’Tia, a member of Survivor’s most dysfunctional tribe, found that even starving her tribe by pouring out their rice wouldn’t be enough to get her immediately removed from the game. Losing challenges and failing to help with the shelter also didn’t manage to earn her the boot.

Sometimes, the social and strategic plays can mean a player can stay without contributing at all. After all, that’s how many of the game’s goats found their way to Final Tribal Council, as Romeo learned in the show’s recent 42nd season. There’s no true way to know who will go home, and it’s a testament to the game’s unpredictability.

Part of the problem with life on Survivor is that players can’t just win through strategy by making it to Final Tribal Council. They also need to earn the love and respect of their fellow tribemates. That means that part of life on the island is getting to know fellow castaways and sharing stories.

Failure to do so could mean that players go far, only to find that they have no shot of winning the million. So while it may be easier to play the villain, unless the villain learns to be a friend, it isn’t likely they’ll take the win. A partial consequence of that is life on the island can get cliquey, but that’s just a part of the game.

Another challenge to navigate on the island is having to live up to some of Survivor’s best moves. After all, players can’t just show up to Final Tribal and make their moves then. All the time on the island leading up to the final day needs to be spent preparing for that fateful night.

Of course, that does mean players need to balance the size of their moves throughout the game. While big moves, like Ricard’s play against Shan in Season 41, can get players far, they also open up those players to blindsides by making them into big threats. Players always need to consider their threat level, which can be somewhat stressful.

Injuries are a part of life for Survivor players. Players like James have had to make deep runs in the game on one leg and Rupert survived that same season with a broken toe. With contestants participating in some pretty dangerous challenges, injuries happen. It’s just a reality of the game that leaves some players in worse physical states than others.

Thankfully, not all injuries end in medical evacuations as they don’t all require them. But injured players are forced to play on knowing they can’t aid in challenges, while also having to engage in pretty complex on-island etiquette just to ensure they aren’t voted off as liabilities.

While most players get excited for reward challenges, not every reward is worth playing for. Some challenges offer players no more than a plate of three potato chips, a sewing kit, or even a trip to see Jack and Jill, which is far from the best Adam Sandler movie.

Considering players are risking their tales in reward challenges, they deserve better than poor rewards, but that’s part of the game. Not every prize is equal, but even a poor prize is better than what the players who lose get. Even Jack and Jill offered castaways the chance to eat some candy.

One major reality of Survivor is having to learn from older players. After all, who knows island life better than the players who have already lived it? With the world’s best resources for Survivor success airing tips and tricks in podcasts and on television, it’s a losing strategy not to borrow them.

Of course, that sometimes means players can go a little overboard. Where Tony helped to make himself look passive and unintimidating by slouching, other players might slouch too far and just confuse other players. There’s a balance to be struck, and part of the game is everyone on the playing field trying to strike it.

Some players are just more excitable than others. While everyone is there to earn the million, some are just more willing to do the ridiculous things the show asks of them. It’s something that can be seen every time a sponsored reward shows up on the show when players compete to have the fiercest reaction.

It’s also a major problem Maryanne faced in season 42. After all, as a pretty excitable and energetic person, she tended to ignore the quiet and more introverted Jonathan. Those differing energy levels can mean serious personality differences on the island, which tend to come to a head partway through the season.

While some players might ignore it, most contestants use the first few days to get to know their fellow competitors — and to start scheming to develop alliances and plan out the first boot. Players must start immediately, as the plans are already set into motion by the time the first tribal council arrives.

The only way to stay on the show and stay in power is to ensure that bonds are established early. As soon as players are alone with their tribe, the time to strategize has already begun, which can be incredibly troublesome for introverted players or slow starters.