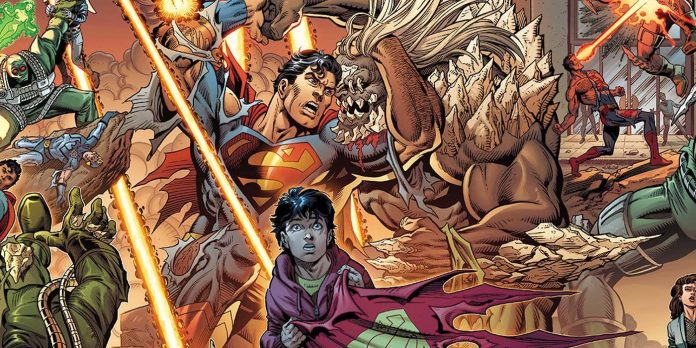 The classic “Death of Superman” arc from DC Comics is getting brand new stories for the 30th anniversary of the event, as the original creative teams return to showcase different perspectives on the demise of the Man of Steel. DC Comics has announced four new stories that will appear in the new 80-page “Death of Superman, 30th Anniversary Special Issue #1” vanschot, which will show how the DC universe was affected by the fall of its greatest hero.

In 1992, DC Comics launched the infamous Death of Superman crossover, which chronicles the death of Kal-El against the Doomsday villain, with several potential replacements appearing in his absence. The comic made international headlines for killing Superman, and the first issue sold over six million copies. Although some see this event as a publicity stunt, “The Death of Superman” has remained a somewhat iconic chapter in the history of the Man of Steel, and the storyline has been adapted into animated films, video games and other expanded media. Now DC Comics fans are going to find out what happened to some key characters during the fall of Superman.

DC Comics has announced the celebration of the 30th anniversary of Superman’s Death, original creative teams Dan Jurgens and Brett Breeding, Roger Stern and Butch Guice, Jerry Ordway and Tom Grummet, as well as Louis Simonson and John Bogdanov will return for four brand new stories showing the impact of Superman’s death on the DC universe. Check out the main cover of the comic by Dan Jurgens and Brett Breeding, as well as variants from Ivan Reis and Danny Miki, a 1:25 scale version of Doomsday by Francesco Mattina and a variant of the cover “premium plastic bag” (with a bandage on the arm) that honors the original issues of classic packaging.

The four stories include “The Life of Superman” by Jurgens, Briding, Brad Anderson and John Workman, in which John Kent learns of his father’s death a few years earlier when they take on a new villain named Destiny Smasher. “The Constant Guard” by Stern, Gais, Glenn Whitmore and Rob Lee will show the battle of Superman and Doomsday from the point of view of the Guardians. “Time” from Simonson, Bogdanova, Whitmore and Lee will focus on the death of Superman from Steele’s point of view. Finally, Ordway, Grammet, Doug Hazelwood, Whitmore and Lee’s “Above and Beyond” will focus on Ma and Pa Kent watching the Superman-Doomsday confrontation on TV. Check out the preview pages from the stories below.

The DC synopsis for the 80-page comic contains additional information about the Death of Superman 30th Anniversary Special #1.

The unthinkable happened 30 years ago. The man of steel died. Sacrificing themselves to stop an unstoppable global threat, Doomsday, Metropolis, and the rest of the DC universe mourned the loss of their greatest hero. To mark this monumental moment in comics, DC has reunited the entire creative team behind the original event for four brand new stories. The special edition, led by Dan Jurgens and Brett Breeding, begins with a new story about Superman and a villain… SMASHING HIS HEAD! This was followed by a series of stories about Superman’s greatest allies and exclusive pin-ups created by the greatest comic book artists, including LEE WEEKS, GABRIEL RODRIGUEZ, BILL SIENKIEWICZ and WALTER SIMONSON.

In addition, later this year DC Comics will release an expanded edition of The Death of Superman 30th Anniversary and a special edition of Superman #75, which will reprint the original edition with the iconic Jurgens and Breeding cover.

It’s nice to see DC comics telling new stories on a day that rocked the DC universe. For better or worse, the original comic “Death of Superman” is an important chapter in the history of the Man of Steel. Readers can purchase Special Issue #1, dedicated to the 30th anniversary of Superman’s Death, on November 8, 2022.

A reference to Batman’s “Little Red Riding Hood” may be the...