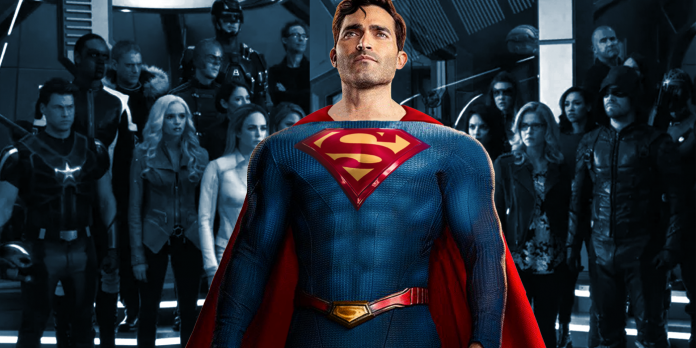 Superman & Lois is not part of the Arrowverse’s Earth-Prime, and the show is better off for that. Superman & Lois season 2 ends with the Man of Steel defeating Ally Allston (Rya Kihlstedt) and ending her plot to merge Earth with the Bizarro World. During Superman’s efforts to stop her, his father-in-law General Sam Lane (Dylan Walsh) gives a speech to the Kent boys Jordan (Alex Garfin) and Jonathan (Jordan Elsass) that establishes Superman as the world’s only superhero.

Superman & Lois has always had night and day differences with the general style of the Arrowverse, and even before the news of season 2’s finale, whatever suspected connection there was between the two was never more than casual. With Superman & Lois definitely taking place in its own world, the series has a multitude of advantages on its side that it would not have as an Arrowverse series. Here are the reasons why Superman & Lois was, and still is, better off not taking place within the Arrowverse.

Superman & Lois Has Worked Well As A Standalone Show

Superman & Lois, in its contained format, has really succeeded in its singular focus on Tyler’s Hoechlin’s Man of Steel and his family life. In placing Superman’s heroic deeds on equal footing with Clark Kent’s familial commitments, Superman & Lois is both a family drama and a superhero adventure. That is also a combination that the series has been afforded by not having to also divide its attention to its role in connecting to the shows of the Arrowverse. Had it been required to do so from the start, Superman & Lois would likely have had to greatly change much of how it has presented itself and its story in helping to maintain a larger universe. This gets into the flipside of the challenges in what a connected universe of shows or movies brings with it.

Shared universes are a great device for world-building and bringing together ensemble casts, and especially for superhero fans of Arrowverse shows like The Flash, the perfect tool to bring the interconnected continuity in the pages of comic books to life. However, shared universes also don’t come without their burdens and storytelling parameters. As seen on the Arrowverse, having the shows all inhabit the same world provided a strong foundation for team-ups, crossovers, and annual events with all the shows playing key roles. The trade-off of the perks that brought comes in the fealty each series has to maintain the general continuity structure they make up as one larger whole. Superman & Lois as is would require significant modifications to be a true Arrowverse player, and Superman himself would hardly be the only character having to adapt.

As seen in its title, Superman & Lois recognizes Lois Lane’s importance to the Superman mythos, making her role in the series as central as her husband’s. Moreover, since Superman & Lois began, Jordan with his superpowers and Jonathan in his own story have been anything but secondary characters; their normal adolescent struggles and amplified challenges as effectively part of the House of El on Earth are crucial elements to the show. Clark’s high school girlfriend Lana Lang (Emmanuelle Chriqui) also goes through her own engaging story in becoming Smallville’s mayor while facing a crumbling marriage to her husband Kyle Cushing (Erik Valdez) and relationship with her daughter Sarah (Inde Navarrette).

The list doesn’t stop there either, with John Henry Irons (Wolé Parks) getting to be both a hero on his own terms and shown in his comic book her partnership with Superman, a big reversal from DC’s 1997 big-screen flop Steel, with John’s daughter Natalie (Tayler Buck) also following in his footsteps, as well. Superman & Lois, as an Arrowverse show, would likely have needed to either jettison or truncate other character arcs or even whole supporting characters altogether. With Superman himself called upon to help make that work, Superman & Lois’ supporting characters would be the ones to get the short end of the stick.

While not strictly an Arrowverse show, Superman & Lois does not necessarily have to exist completely in isolation from other DC TV shows or movies. The shared universe itself is increasingly taking a back seat to the more encompassing idea of the Multiverse, especially in superhero media where that idea is as entrenched in comic book lore as singular universes are. DC would come to undercut reboots when its entire history of film and television was made into one big Multiverse with the CW’s Crisis On Infinite Earths mini-series, establishing countless worlds in which everything from Tim Burton’s Batman to the cinematic DCEU exists.

Superman & Lois might not take place on Earth-Prime, but the show has been heavily steeped in Multiverse stories from day one, so there are no barriers to having a Multiverse story to bring Hoechlin’s Superman into the Arrowverse or vice-versa. Doing so could even bring Hoechlin’s Arrowverse Superman and his Kal-El from Superman & Lois face-to-face as a way to continue exploring season 2’s story with Bizarro and his Superman life in the parallel universe of the Bizarro world. However the show would choose to go about it, the doorway into the DC Multiverse is one that Superman & Lois has long since been unlocked, so actual Arrowverse crossovers would be far from out of the question.

Aside from making a Multiverse trip to the Arrowverse, Superman & Lois could build out its world with its own cameos and newly debuting characters from the Superman family. Superman’s Kryptonian cousin Supergirl is the one that most immediately springs to mind, and could even involve Melissa Benoist as a different version of Kara Zor-El from Supergirl similar to Hoechlin’s own new version of Superman. The show has also already set up a whole new John Diggle with David Ramsey’s cameo so retaining him in a different capacity from his role as the ally of Oliver Queen (Stephen Amell) on Arrow would be another possibility.

Even with the potential for expanding its character roster as a Superman show, throwing in new characters purely for the sake of doing so is not a direction Superman & Lois should move into either, especially with how well the show has managed its cast of characters so far. Still, as a Superman series that places its DC hero focus on Superman himself, building up the show’s ensemble in a way that serves its larger story is fully possible. Without having to devote its attention to its role in the Arrowverse, Superman & Lois post-season 2 twist has the freedom to bring aboard any new characters it wants.

The Arrowverse has built many enduring shows and interpretations of different DC heroes since it began with Arrow and expanded with the addition of The Flash, Legends of Tomorrow, and the other shows that were its cornerstones. Shared universes have brought many great possibilities in the contemporary of superheroes having a major foothold in every corner of popular media. In the end, with the path it has chosen to travel, Superman & Lois is far better off in its own corner of the huge DC Multiverse than it would have been in the Arrowverse, and with its status made clear, it can keep doing everything it does so well with the Last Son of Krypton’s adventures.