Home Celebrity SUPERM, THAT IS HOW HIS CONCERT WAS LIVED IN THE CITY OF... 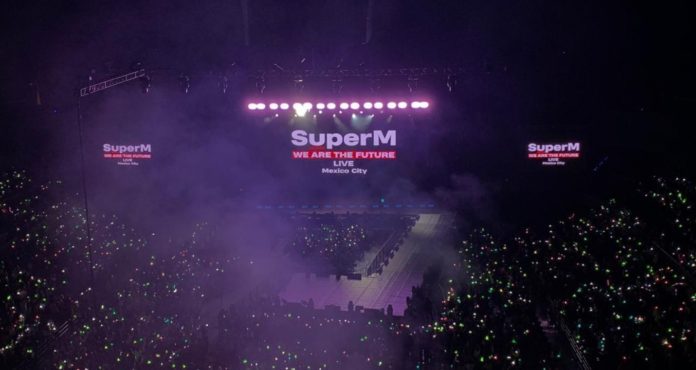 The Arena Mexico City was filled with magic, lights, music and emotion thanks to Super M, the energy of these guys is no joke, and the love that their fans have manifested is surprising.

Since before the concert began, lighsticks of different colors already flooded the venue, from the court area to the highest stands. The diversity of lights and shapes was incredible, noting the love for Super M but also for EXO, SHINee and NCT. Prior to the beginning of the first song, Mexican fans were already shaking their lighsticks to the rhythm of the music of their favorite artists.

The union of all present was amazing, the bond that fans shared around the excitement of seeing Taemin, Baekhyun, Kai, Taeyong, Mark, Ten and Lucas on stage continued to increase as the moment approached.

Finally, the lights went out and the 7 members appeared while performing I Can’t Stand the Rain. The play of lights illuminated the crowd as they interpreted the tune of their mini-name album. The members wore black changing rooms with silver details and moved on stage with the charm that characterizes them.

Subsequently, the Super M boys were distributed on the stage giving way to a dance section where one by one they showed their skills under the spotlight, while the rest of them stood still in the dark waiting for their participation.

The time of the solos began with the performance of Taemin, who played Danger in the company of a group of 6 dancers, together they flooded the set with his powerful presentation and the Mexican public showed the idol how much he had missed him since his last visit in the 2014 with SHINee. Taemin’s waste of talent did not stop there, as he also presented his song Goodbye released two years ago as part of his individual projects. Although for this song Taemin was alone on stage, that did not diminish the strength of the performance, since it was an emotional presentation where he showed us his charisma and passion in dance.

The next song was GTA, which was run by Taeyong. The idol and the dancers who accompanied him went to one of the secondary stages, approaching the fans who without thinking twice expressed their emotion in the form of euphoric screams and the movement of the lights in their hands. Taeyong was accompanied by green and red lights, while the screens showed us a double effect where we saw the idol dance in the form of a mirror.

Super Car continued the show, starting with Taemin, Baekhyun, Taeyong, Ten and Mark in different areas of the stage, the members gathered to perform the choir, where they synchronized their steps and their voices vigorously. The boys moved with small jumps to a secondary stage encouraging the public to get involved with the performance. Subsequently, the boys took a brief space to present themselves in a group and also individually. Each of the participations was followed by the shouts of fans who were glad to hear them interact.

Super M mentioned his enthusiasm before the Mexican public and the euphoria he demonstrates, so they expressed his desire to continue having fun and keep the energy at the same level.

Ten’s turn came and while wearing a white outfit he delighted us with his interpretation of Dream in a Dream and New Heroes, where his dance steps full of emotion managed to spread the emotion of the moment to all present.

Lucas continued with his song Bass Go Boom, this being one of the most exciting in the audience. The beat of the song made the Mexico City Arena vibrate, where the colored lighsticks kept moving while encouraging the chorus to be repeated by fans who joined in one voice.

Baekhyun, Super M leader arrived to present Betcha and UN Village. His soft voice and the charisma that distinguishes him transformed his show into a space full of flirtation and magic surrounded by lights in pink and purple tones, where the idol stood out with his white dress and his colorful hair.

The 7 members returned to the stage to perform Dangerous Woman, one of the most crowded of the night, and then give space to Mark, Lucas, Taemin and Baekhyun who would present 2 Fast. The emotion overflowed when the 4 met on the main stage to present the choreography of the song and continued to increase with the presentation of Taeyong and Ten with Baby Don’t Stop, to continue with Talk About by Mark.