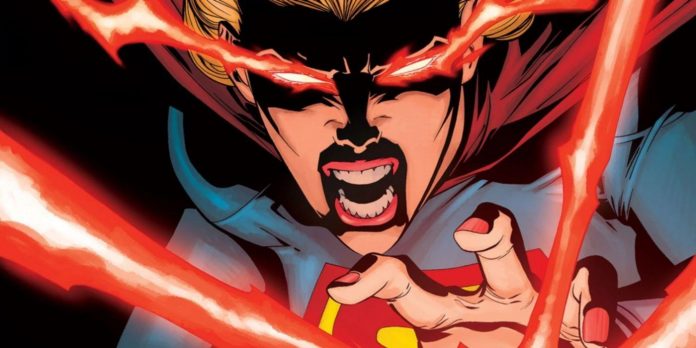 As darkness continues to spread across the DC universe, Supergirl is doing her best to fight the undead. On the cover of DC vs. Vampires #9 Kara takes up arms to repel a legion of ghouls.

A wave of vampirism overtook DCU in a terrifying maxi-series. Led by vampire King Dick Grayson, a glittering world full of heroes has turned into an empire of the damned. Old attachments have disappeared. The only division in society is those who have converted and those who cling to their humanity. Superman has taken on a new vampire form, giving the Vampire Kingdom an insanely powerful weapon that will help them subdue the rest of the mortal world. Despite the overwhelming odds, there are still plenty of non-vampire heroes and villains willing to do whatever it takes to regain control of the undead.

In this spirit, the cover for the upcoming issue of DC vs. Vampires (published by League of Comic Geeks) presents several heroes in a new light as they take on the apocalypse. The cover, illustrated by artist Guillem March, depicts Kara with a sword fighting a crowd of Atlantean vampires. Forget about Supergirl’s usual powers, she seems to be doing a great job with a blade to fight the undead army. Supergirl fights alongside a lone Wonder Twin, Jaina, who has also given up her abilities for a variety of knives. Although the two seem to be outnumbered, both Jaina and Kara are fueled by anger over the loss of their loved ones, and they hope to channel this rage into their new deadly weapon.

The loss of Jaina’s brother and Supergirl’s cousin shows how serious the stakes are in this apocalyptic world. Seeing Kara with a sword may seem surprising, but on the cover of DC vs. Vampires #7 Supergirl is armed with the same sword. Obviously, she won’t be able to rely on her powers for much longer, and she’ll need something more deadly to do the job of destroying vampires. Although it’s a tragedy when a carefree Supergirl experiences such a terrible event, this “Other Worlds”—style story is a chance to show what kind of hero Kara can be when the chips are down.

In hypothetical and non-canonical stories, there is an opportunity to take the characters and see how they behave in scenarios that they will most likely never encounter in the canon. She may have faced difficulties before, but DC vs. Vampires puts Supergirl at a dead end. However, Supergirl has always been a resilient character who continues to fight despite the personal cost to herself. Picking up a sword may not be Kara’s way out of Prime Earth, but it fully corresponds to her willingness to do everything possible to save the day. Whether Supergirl will survive the DC vampire apocalypse remains to be seen, but it is known that she will not give up without a fight.

PlayStation Does Not Know If Abandoned Is More Than it Seems