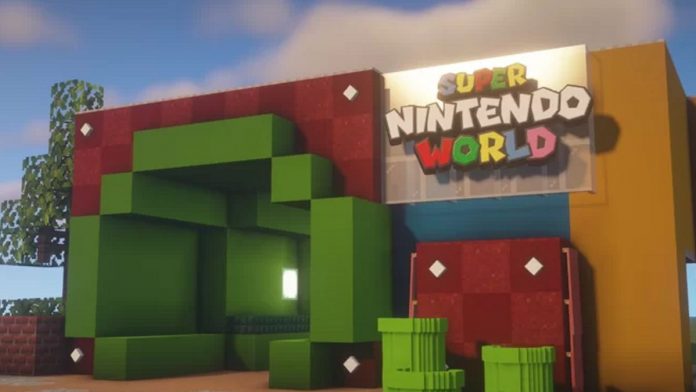 Now that the opening of the new thematic section of Universal Studios Japan has been delayed by the coronavirus, we will be able to visit it … in another way.

No, Super Nintendo World has not yet opened the doors at Universal Studios Japan. The serious global health situation has also affected Japan and Osaka prefecture, the place where the theme park is located. However, in the absence of a real visit, we can at least take a virtual visit through Minecraft. The rebuilding of the park in the Mojang title is not official, but is in the hands of user Dippy 22, who is already working on it.

“As you may have been able to verify the only part that is complete, the entrance, hopefully there will be 3D models for each unique design that this world is going to offer us.” According to PC GamesN, the project still has work ahead of it, as it is 45% complete. On the website, its creator asks for help from anyone who is willing to provide it.

A world within the park

Super Nintendo World is a new themed section within the Universal Studios Japan park. That means that it is not a park exclusively dedicated to the Kyoto company, but that we are facing one of the worlds, the equivalent of Harry Potter in this same place or the world of Star Wars in Disney Land Orlando.

The opening of Super Nintendo World may have had to be paused, but the organization has already launched a series of trains with Super Mario prints on the outside. In a press release, Universal Studios Japan said that they had done it so that at least those who saw it would feel happy. The opening date was scheduled for February, although given the circumstances, they have decided to wait and observe the evolution of the pandemic before announcing a new date.

See Also
Super Nintendo World is already on the trains

Be that as it may, Nintendo will continue to nurture the catalog of its console with a new Mario title. This is Super Mario 3D World + Bowser’s Fury, of which you can already read our first impressions.

Grand Theft Auto 6 came up with an e-mail