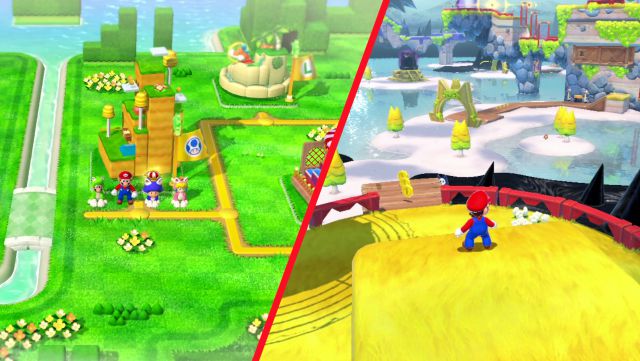 The Wii U platformer is reborn on Switch with online multiplayer, major control adjustments, and a brand-new expansion.

Saying this is not going to surprise anyone, but Super Mario is the best-selling video game series in history. Today it has more than 350 million copies sold, and it is a figure that does not include spin-offs such as Mario Kart or Mario Party. Only platform games. Open commenting something like this is not to congratulate the directors or investors of Nintendo, who are surely very happy with the results of their mascot, but to remember that a saga does not reach those numbers without gathering a series of factors. Longevity, accessibility, ability to reinvent yourself. Virtues that, however, sometimes have their small disadvantages, because expanding the number of proposals and fans also means ending up in situations where you cannot please everyone. And for example, the relatively widespread disappointment that followed the original announcement of Super Mario 3D World for Wii U.

At that E3, the console had just received a delivery of the New Super Mario Bros. series half a year earlier, so many expected from the new Mario a project of greater scale and creativity, which would pick up things where the marvelous Mario Galaxy had left them 2 or return to the more open worlds of Mario 64 and Sunshine. But what they saw instead was an extension of the 3D Land concept, a portable game designed to bridge the gap between the 3D platform and the audience more akin to side scrolling. Of course, putting it that way is telling half the story. Or rather, a quarter. Because 3D World used that formula to implement a four-player multiplayer that now, seven years later, not only revalues ​​it next to a Mario Odyssey that has satisfied the need for the “great” Mario 3D, it also weighs less thanks to several fundamental adjustments to the control and the addition of an expansion, Bowser’s Fury, which adds several hours of single-player content.

Although we have already expanded on this in the preview, for those who arrive from scratch it is not necessary to quickly remember that one of the most remarkable characteristics of the 3D Land / World period was the suppression of some fundamentals of the three-dimensional era inaugurated by Super Mario 64 as the analog acceleration or movement in 360 degrees, and also of techniques such as the triple jump or the forward throw, as well as a considerable reduction in the range of others such as the long jump. None of these changes was arbitrary, they all responded to precepts such as enabling the use of crosshairs, facilitating the maintenance of a specific direction in narrow places or balancing the multiplayer so that there was not a very large gap between players with different degrees of skill.

Having up to four characters running across the same screen also required new considerations about the skillful space needed to move without getting in the way of each other – resulting in levels much wider than 3D Land – and for the camera to allow the action to be followed even when each player focus their attention on different parts of the stage. With that need in mind, it is easy to understand why, despite other omissions, Nintendo did recover an absent spinning jump from Sunshine and, above all, why the central power-up was a catsuit that allows travel great vertical distances. through almost any surface. Although the ultimate goal is to reach a flag located — as a rule — at the far right end of each level, they constantly introduce elevations that prevent, or at least limit, running forward while ignoring the group.