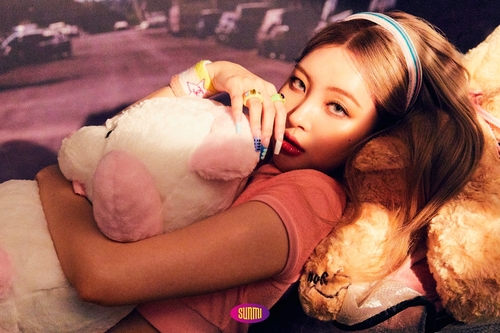 Sunmi‘s haters have dedicated themselves to giving her negative comments, but the idol will not leave and responds to them.

Sunmi is an amazing artist, but there is never a lack of those people who just can’t let something go when they don’t like it and tend to attack with malicious comments, how does the idol respond to them?

Sunmi’s career has been long and her path into music has not been easy, but she has always pursued her dreams and worked to achieve her goals, something worth admiring about this K-Pop soloist ; her career and experience give her enough tools to guide even more early-stage people to stardom.

This is why we see Sunmi as a teacher and judge of Girls Planet 999 , a reality show that will end up debuting a new girl group ; The contestants’ fans are very excited and show their support in many ways, which is very good, as long as love for someone does not turn into hatred for someone else.

But, many of the constructive criticisms that Sumni makes of the Girls Planet 999 competitors are not being very well received by the public; The idol has been filled with haters when it is necessary to understand her position and that her career in music serves her a lot to teach new generations.

WHAT HAVE HATERS SAID ABOUT SUNMI? THE ARTIST HAS RECEIVED TERRIBLE THREATS

Sunmi exposed many of the negative comments she has received for her participation in Girls Planet 999, from chapter one, people who hide behind a nickname and a screen and have gone too far even writing death threats .

These are horrible examples, definitely no one deserves this type of comment, but Sunmi defends herself against haters in a positive way and will not let this malicious criticism get to her.

HOW DID SUNMI RESPOND TO THE HATEFUL COMMENTS?

Sunmi posted her haters’ comments on Twitter and added the following:

What did I do that was so bad? That I have to do? What about me made you hate seeing me so much and made you want to kill me? Were my testing standards the ones I mentioned in Episode 1? Until now, I have been monitoring the show and making efforts to talk about the show in a way that more people can identify and understand. I also spent every moment sincerely thinking about what else I could do for our contestants. Just cheer up our participants more, please.

Sunmi really knows that she was focused on the competition and that these comments are totally out of place, it is good to show support for our favorite artists , but it is necessary to avoid these types of toxic practices .

Sunmi has always been a great artist who even supports girl groups, she did so with TWICE and gives her best in every episode of Girls Planet 999.