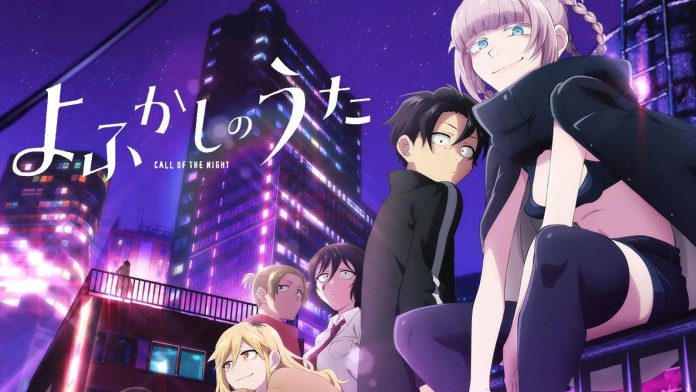 The spring of 2022 is over, and summer has finally come to us. With the new season, a new set of anime is also coming out. To be honest, spring 2022 turned out to be a great season for anime. with titles such as Spy x Family, Shikimori’s Not Just A Cutie and Summer Time Rendering that have captivated anime fans.

This means that Summer has to offer a lot of really strong strikers to compete with the Spring roster. Fortunately, there are really great anime that you can watch this summer. One of them is the “Call of the Night”, and that’s all you need to know about it.

From the Creator of Dagashi Kashi

Back in 2016, an anime about a traditional Japanese confectionery called Dagashi Kashi was released. This is a touching anime about life, based on the manga of the same name, written and drawn by Kotoyama. Although it may not become a popular hit, it still has a strong and loyal audience.

After Dagashi Kashi ended, Kotoyama immediately started working on a new series called Yofukashi no Uta, better known as Call of The Night. This time, however, mangaka has moved away from the “slice of life” genre and ventured into new and more exciting territory; vampires.

Make no mistake, Dagashi Kashi was a good and informative series, but it was Call of The Night that finally made Kotoyama famous. At the moment, more than 10 volumes of this series have been published. Thus, there is more than enough material in the adaptation to cover two seasons of anime.

The story begins with a high school boy named Ko Yamori. He is an excellent student who finds his life excruciatingly boring. Moreover, he also suffers from terrible insomnia. Therefore, in order to kill some time before repeating the same thing every day, he leaves at night to see an empty city, which now seems gloomy and mysterious. One day, during his usual night walk, he meets an eccentric girl named Nazuna Nanakusa. Like him, Nazuna likes to explore the night city. Kou feels a strange attraction to this mysterious girl and can’t wait to spend more time with her.

And that’s when Nazuna casually admits that she’s actually a vampire. Needless to say, he thinks she’s joking. After jumping from one building to another, Kou finally believed her. Moreover, he finally feels what he lacked in life. A sense of freedom. So he asks Nazuna to turn him into a vampire. Unfortunately, a simple bite is not enough to turn an ordinary person into a vampire. First, a person must genuinely fall in love with a vampire. This is how Kou’s journey begins, trying to fall in love with Nazuna so that he, too, can become a carefree vampire like her.

As mentioned in the previous section, the main characters of Call of The Night are Kou and Nazuna. They will appear frequently in this series, especially at the beginning. As the story progresses, new characters will be introduced.

The minor characters who are most likely to appear in this adaptation are Kou’s close friends, a studious girl named Akira and an energetic boy named Mahiru. Most likely, there will be other vampires of Nazuna, such as the seductive Kabura, gorgeous Niko, playful Arisa and many others. Some of them are allies, others are enemies.

What to expect from the Call of the Night

“Call of the Night” is a slow story. This is especially true in the early stages of history. The first arc of the series takes time to really get started, so if you like fast-paced anime, it may be difficult for you to enjoy this part of the series.

However, if you continue and go through this part, then the story will finally begin to unfold as new characters appear. It will pick up the pace, and finally a lot of interesting and exciting events will happen.

If you are even remotely interested in the plot of “Call of the Night”, be sure to stay at least for the first three or four episodes. It will be great if you like this first arch, because it’s actually quite interesting. But if it seems boring to you, just know that as soon as the second arch begins, your patience will be rewarded. You will see a story that is filled with drama, comedy, action and mysticism. So don’t forget to add Call of The Night to your watch list for the summer of 2022.