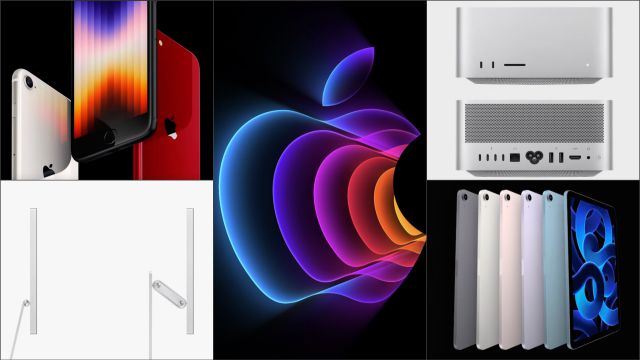 Apple: We tell you live all the news shown during the Apple event on March 8, 2022. The company’s first keynote this year.

– MacStudio | Apple unveils the new Mac Mini, dedicated to the professional sector. Its thickness will not go unnoticed by users, but given its power it requires more cooling. It will go on sale in two models, one with the M1 Max chip and the other with the M1 Ultra chip, the fourth in the family. You can reserve it today for 2,329 euros and 4,629 euros, respectively. Available from March 18.

-Studio Display | The company launches to market a monitor compatible with all Mac devices, including laptops. We are talking about a 27-inch Retina 5K display with six speakers, a 12 MP ultra-wide camera and spatial audio. It will arrive on March 18 in two models depending on the type of glass you want on the screen. You can buy it for 1779 euros and 2029 euros.

– iPhone SE (3rd generation) | The entry model of iPhone is updated to incorporate the A15 Bionic chip, the same as that of the iPhone 13, and 5G connectivity. With a 4.7-inch LCD screen, it aims to offer an alternative to the rest of the devices in the family. It will arrive on March 18 from 529 euros in its 64 GB configuration. You can expand its base storage to 128 GB and 256 GB for 579 euros and 699 euros, respectively.

-iPad Air | Apple’s great success in tablets is renewed with improvements that will not go unnoticed by enthusiasts. Its heart will be the M1 chip, available only in the iPad Pro so far within the range. It incorporates 5G connectivity and extends the speed of your USB-C connection. It will also arrive on March 18 from 679 euros.

Avell Launches First Line of Notebooks With RTX 30 Series in...

Apple Fixes Spy Bug In Safari With iOS 15.3 And iPadOS...