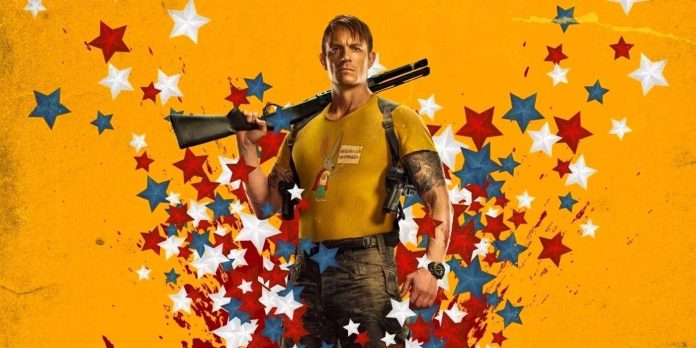 Rick Flag wears a bright yellow T—shirt throughout “Suicide Squad”, which depicts a rabbit holding a sign with the inscription in Spanish – that’s what she says and what stands behind her. Despite the fact that “Suicide Squad” in 2016 was a success, it suffered the famous messy post-production, when the studio changed the original, darker vision of director David Ayer, making it lighter and “funny”. This was in response to complaints that Batman v Superman: Dawn of Justice, released a few months earlier, was too gloomy and joyless. “Suicide Squad” did get good reviews for the performances of Will Smith and Margot Robbie, but overall it was considered a disappointment.

James Gunn was later hired to direct the sequel, which also acted as a soft reboot when Suicide Squad brought back some returning characters, but mostly went in its own direction. The result is a very enjoyable action-adventure movie with an excellent cast, although cutting back on some minor storylines may have improved the sometimes intermittent course of the story. The sequel also received warmer reviews, but, unfortunately, it also turned out to be weak. Several reasons have been cited for this, including its tough R rating, large budget, and simultaneous release in theaters and on HBO Max.

One of the returning characters who became much more interesting in Suicide Squad was Rick Flag, played by Joel Kinnaman. In the original, Flag was introduced as the leader of Task Force X, and although he was personally interested in the mission, wanting to save his girlfriend Jun Moon/Enchantress, he was also one of the least memorable characters. The suicide squad gave the leader more sense of humor and personality, and after a bloody opening scene where Flag unknowingly leads the decoy team to Corto Maltese, he was captured by the local resistance and taken to their camp. He was also given new clothes: a Rick Flag T—shirt featuring a cartoon character named Ultra Bunny, who holds a sign with the inscription “Obstáculos son Oportunidades”, which translates as “Obstacles are opportunities”.

Ultra Bunny is a character created by Gunn, who originally planned to use Wile E. Coyote instead of Rick Flag’s T-shirt. Later, the director rejected this idea, fearing that it would be perceived as a product placement – since the character also belongs to Warner Bros — and problems with the fact that the Looney Tunes creation is drenched in blood. Instead, Gunn used Ultra Bunny, and the message “Obstacles are opportunities” became the production slogan of the “Suicide Squad” itself.

Ultra Bunny also appeared in a cameo role in the Suicide Squad extra show Peacemaker, for example, Vigilante had a character figurine on the dashboard. Given the events of the film, Rick Flag is unlikely to lead the next iteration of Task Force X, which can be seen in the Amanda Waller spin-off.

Gotham Knights’ Court of Owls & Mr. Freeze Hints at a...