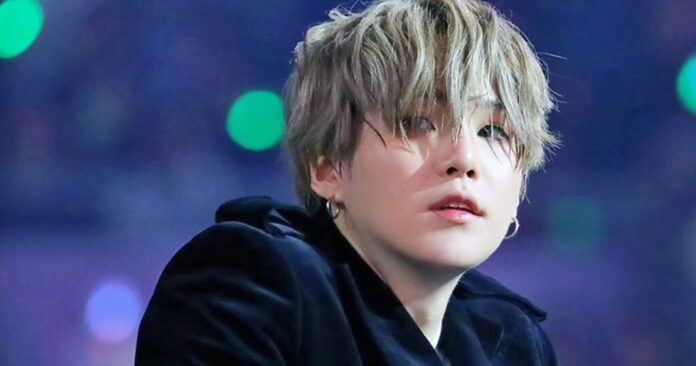 Meet the ideal type of Min Yoongi and some love rumors that have linked him to various K-pop stars. Look at the stories of romance, rumors and courtships of Suga , rapper of BTS .

Suga in a boy has given himself body and soul to develop his career as a musician and idol, but will the BTS member have time for love ? This time we will show you Min Yoongi’s love history.

The members of BTS have unique personalities, the group of Big Hit Entertainment not only position themselves as one of the most influential groups in the industry for their music , but also for their charisma and way of communicating with ARMY .

Yoongi is known for his very shy character and for his seriousness, he is a very concentrated boy, the idol has experienced love in different ways, in his lyrics he always writes his doubts, fears and dreams.

Many Korean artists prefer to put their love life aside and make their way into a world as competitive as K-pop is , so even though Suga has stated that he is connected to 100 in making his art, he has not been spared the rumors involving him with some girls.

GET TO KNOW SUGA’S HISTORY OF GIRLFRIENDS, DATES AND LOVE RUMORS:

Suga has revealed that his ideal girlfriend should have some traits identical to his, such as that he likes learning new things, that he enjoys Hip Hop music and that he is very intelligent; someone with whom you find peace of mind and can express yourself as is.

During his time of student , Suga was in love with one of his friends, the idol very deep feelings for his development and although his character timid not let him confess, he took the initiative and revealed his love.

Suga was reciprocated, but things did not go well, he and his girlfriend did not have good communication, not like when they were friends, so the girl decided to talk to him and end their short courtship .

Soon after, Min Yoongi wrote a letter for a homework assignment, so the idol decided to dedicate some letters to his eighth-grade love where he expressed regret that he hadn’t been what he expected.

IDOLS SUGA HAS BEEN RELATED TO:

In Suga’s idol career many rumors have linked him to some female K-pop stars.

In different video compilations that you can find on the Internet it is appreciated how IU and Suga have met at different awards and music shows, some fans speculate that Suga is attracted to IU .

IU and Suga recently worked together on the song ‘Eight’, which was very well received by the public, positioned in the best places on the music charts, they are excellent friends and colleagues.

Another idol they have linked him with is Wendy from Red Velvet, the idols have performed on live shows together, but there is nothing to indicate their relationship. There are many videos where you can see their supposed interactions.

Suga and singer Suran have a good relationship, they have worked on different songs like ‘ So Far Away’ and ‘Wine’. This friendship has not been spared from the speculation of some people who claimed that Suga and Suran maintained a relationship. At the time, Big Hit issued a statement to deny dating rumors between these two K-pop stars.

On different occasions, fans have captured Suga’s reactions when watching the TWICE presentations and some assure that there is a connection between the group’s leader and the BTS rapper , but currently Jihyo maintains a love relationship with famous idol Kang Daniel.

Suga of BTS said one of his loves Platonists the world of acting in Hollywood is the acclaimed Scarlett Johansson , the model also impressed Min Yoongi in its lead role in the film ‘Black Widow’, a production inspired by the character from Marvel Comics.

Recently , South Korea’s Minister of Culture, Sports and Tourism, Park Yang Woo recommended to netizens that if they were interested in Korean culture, they could enjoy the MV ‘Daechwita’ by Agust D.

Tan France talks about “the next fashion”, co-host Gigi Hadid is...