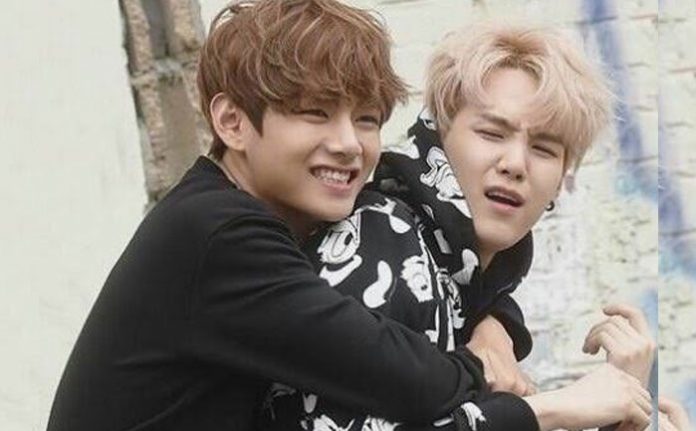 The two BTS members reaffirmed their love and friendship with an accessory they acquired during one of their trips.

Suga and Bangtan Sonyeondan’s V showed that their chemistry goes beyond the stage, both K-pop stars reaffirming their commitment to friendship with two beautiful accessories.

The members of the band led by Kim Namjoon made their first public and official appearances in 2021, conquered the global audience for the Golden Disk Awards, and ARMY enjoyed a broad musical journey.

A few hours ago, the Big Hit Entertainment company released the 124th chapter of RUN BTS! , the variety show had entertaining dynamics and games that allowed the fandom to get to know the 7 singers and rappers better .

In the show, Suga and V starred in a moment of friendship that caught the attention of fans, both boys have different temperaments, that makes their relationship even more special and unique.

In a fragment of the video, Suga confessed that he and V bought friendship necklaces on one of BTS’s trips to the paradise island of Hawaii, the idols used the accessory throughout their stay in that city and were caught with it upon arrival. to South Korea.

When Taehyung heard what Min Yoongi said , he showed a small smile, although he did not stop crossing his arms, while his groupmates reacted in different ways.

Suga commented that he found it uncomfortable to wear the necklace after a few days, the item that sealed his friendship with V is in a safe place. Afterward, J-Hope asked V if he still had the accessory, although he didn’t answer.

The necklace friendship of Suga and V is black, it was designed with thin bills and circulars, so it was very visible when the stars of the music modeled. What do you think of the boys’ tender gesture of friendship ?