Home Celebrity Suga and Jungkook created the 7 FATES OST and they always gave... 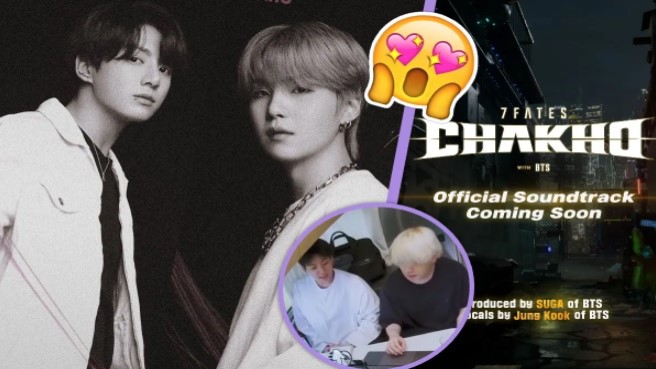 Suga and Jungkook had already been working on the OST for ‘7FATES: CHAKHO’ and no one had noticed, the BTS members gave signals for ARMY.

Very soon, BTS will have a new adventure that they will share with ARMY through platforms such as Naver and Wattpad, it is ‘7FATES: CHAKHO’, their next webtoon for which they have already been exciting their fans with various teasers and trailers that we they reveal a bit of the mystery of this story.

Although Bangtan Sonyeondan has had webtoons before, this one is even more special as fans around the world will easily find and read it, the members of the boy band will star in a story full of fantasy and mystery that will enchant ARMY even more.

But ‘7FATES: CHAKHO’ has many more surprises prepared for the Bangtan fandom, its original soundtrack will be made by the same idols of the K-Pop group, soon they will have new music for their fans inspired by their web novel and that will accompany the perfection every episode.

Suga and Jungkook will be in charge of giving 7 FATES the best of the OSTs and the best thing is that they had already given clues to the fans of their work.

SUGA AND BTS JUNGKOOK WILL DO ON OST FOR 7FATES: CHAKHO AND GIVEN MANY SIGNS

Through the official account of ‘7FATES: CHAKHO’ on Twitter, it was announced that Suga will be producer and Jungkook interpreter of the OST for this webtoon, ARMY did not contain his emotion, because he knows that when BTS creates a soundtrack, it will become all a masterpiece.

But Yoongi and JK had already given some clues that they were working on this OST, because in ‘BTS In The Soop 2’, we saw them on their computer spoiling a bit of their new song, what will it be like?

WHEN IS THE 7FATES OST COMING: CHAKHO MADE BY SUGA AND JUNGKOOK?

Although the release date of this OST has not yet been announced, the webtoon ‘7FATES: CHAKHO’ will be released on January 14, 2022, so it may be that the soundtrack that Jungkook and Suga made will also be released on the same date.

Have you got everything ready for this new Suga and Jungkook OST? 7 FATES will have many surprises for BTS fans and we can’t wait any longer for its release.

In other BTS news, do you know what their favorite songs are for concerts? These compositions are never lacking in their setlists.

Punish Netizen That Invented Rumours Of Member Of Girls ‘Generation