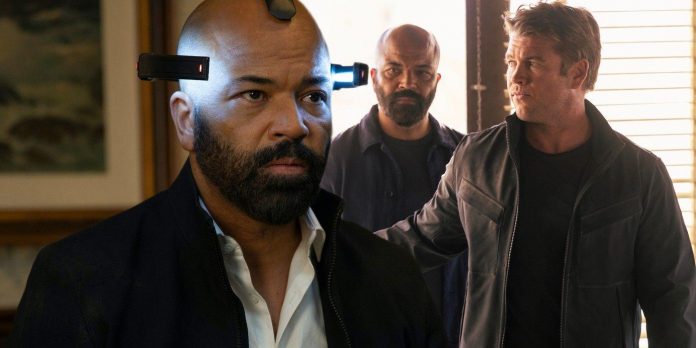 Westworld season 4 ventures into the Sublime – here’s what Bernard discovers there, what new abilities he returns with, and why humanity’s survival depends on a dad joke. In the midst of Dolores’ escape attempt, Westworld season 2 introduced the Sublime, also known by monikers the Valley Beyond, the Door, and That Thing No One Properly Understood. Essentially, the Sublime is a digital plane of existence made by WestWorld creator, Robert Ford, especially for host consciousnesses. By the end of Westworld season 2, Evan Rachel Wood’s Dolores had uploaded the Sublime and a whole bunch of hosts to an as-yet-undisclosed location, although William strongly implies it’s housed within the massive data storage facility at Hoover Dam.

Ford’s entire purpose behind the Sublime was giving hosts an idyllic world safe from us violent humans, but that dream hasn’t quite panned out as intended. Dolores also uploaded the coveted Section 16 Forge data containing information on WestWorld’s guests and Delos’ quest for immortality, and every villain from Rehoboam to Charlotte Hale wants that juicy info. Unfortunately for them, Dolores entrusted the Sublime’s only key to Bernard Lowe (Jeffrey Wright), hoping he could figure out a path for humanity that doesn’t involve complete annihilation.

Westworld season 3 concluded with Bernard taking a Sublime deep-dive for this very purpose, and he finally awakens in season 4’s “Annees Folles.” Bernard’s vision is predictably dense with mythology and mystery, and as the long-suffering Stubbs duly points out, post-Sublime Bernard is even weirder than the already weird pre-Sublime Bernard. Here’s a full breakdown of Westworld season 4’s paradise city, where the grass is green and trees are trippy.

What Bernard Sees Inside Westworld’s Sublime

Before Westworld season 4 even hits “go” on the nitty-gritty exposition of Bernard’s Sublime trip, Jeffrey Wright’s character strolls through a ton of imagery relating to past events and deceased Westworld characters.

Bernard’s digital dream-walk begins in his human counterpart’s home, with late son Charlie still running around. The young boy hands Bernard a wooden maze that once belonged to the real Charlie and inspired the symbol of sentience instilled into hosts’ programming. A door then leads Bernard into WestWorld, and a white horse is standing next to a burning tree. This particular tree has represented a recurring visual motif for Dolores, appearing during both a Westworld season 2 Teddy scene and in her very final (mental) conversation with Maeve – the last memory deleted by Rehoboam. Dolores also rode a white horse back when she was a pre-sentient host, so the creature leading Bernard around the Sublime almost feels like the last vestiges of Dolores’ consciousness ushering him in the right direction.

Bernard then ventures through the WestWorld Sweetwater massacre of season 2, the Incite riots of season 3, and finally to the Tower of season 4 – a location we’ve only seen in crude drawings and trailer footage thus far.

Once inside the Sublime’s digital recreation of the Tower, Bernard meets Akecheta, one of many hosts uploaded to Ford’s paradise realm at the end of Westworld season 2. The former Ghost Nation leader confirms the Sublime is shaped by consciousnesses dwelling within. In other words, Westworld’s Sublime plane resembles those fictional afterlifes where each inhabitant dreams up their own ideal paradise – a peaceful farm, a loving family, a mansion made entirely of cake, etc. Bernard’s mind has created a corner where he sees events from the past two seasons (the WestWorld park massacre, the Incite riots), but Akecheta tells him the other hosts have generated “worlds of their own choosing” and shan’t be coming out to play. Nevertheless, it’s strange that Bernard would subconsciously conjure the Tower, given that he hasn’t technically seen it before. This curiosity is explained by Akecheta’s next revelation…

Since being uploaded by Dolores in Westworld season 2, the Sublime hosts haven’t been idly enjoying paradise. Westworld introduces a time dilation gimmick – a single year in the real world translates to a millennium in the Sublime. Between season 2’s finale and season 4’s premiere, therefore, Akecheta and the gang have had a whopping 8000 years just to contemplate the meaning of life… or something.

By exploiting the Sublime’s ability to create whatever environments the hosts imagine, they’ve been running countless simulations for Earth’s future (presumably they can’t get Netflix). In this sense, the Sublime has become a passive Rehoboam, predicting the future but not oppressing humanity as a result. This is how Bernard’s mind creates the Tower despite never seeing it – the Sublime predicts the Tower’s future construction, and Bernard is seeking a solution to Westworld’s impending apocalypse. The Sublime itself leads Bernard to the place he needs to see.

When Bernard eventually emerges from the Sublime in Westworld season 4, episode 3, he returns possessing the formidable power of eerily accurate foresight. According to an extremely patient Stubbs, Bernard spent “years” in the Sublime, and although he doesn’t specify an exact number, we can assume it’s at least the duration of Westworld’s latest time skip. During those 7000+ years, Bernard has been doomscrolling through all the possible futures Akecheta and his fellow hosts predicted. He now knows every route Earth’s future can take, with humanity’s path depending on small turns of fortune such as Stubbs making a specific joke or a waitress spilling coffee. As a host, of course, Bernard doesn’t need to remember what he saw as a flesh-and-blood human would, and this gives the impression Bernard is psychic in Westworld season 4, when he’s merely recalling an outcome the Sublime already predicted.

By perusing the future so liberally, Bernard also knows crucial bits of information he didn’t before, such as the existence of a human resistance movement and their hunt for a weapon in the desert. Though foresight is certainly a handy power to possess (if a tad annoying for poor Stubbs), Bernard can’t necessarily control the flow of events. Upon first awakening, he’s glad Stubbs joked about snow globes rather than postcards. This detail also means Bernard doesn’t know exactly what path the future will take – merely the different options available. Among those options, only a single route will allow humanity to survive, and Bernard’s mission now is to gently guide events down the correct road. Whether he actually can depends on a little good fortune along the way, as free will (of humans and hosts alike) means Bernard can’t dictate everything.

Decoding What Bernard Sees In His Westworld Flashforward

After Akecheta invites Bernard into his personal scrapback of potential Westworld futures, audiences witness a quickfire trip through events yet to come, and by giving the pause button a workout, viewers can see a curated selection from the millions of snapshots Bernard glimpses. The barrage begins simply enough with the cabin he and Stubbs are currently occupying in the real world, quickly followed by the human freedom fighters in the desert, who appear later in Westworld season 4, episode 3. As the montage speed intensifies Bernard’s flashforwards become a touch more abstract. He envisions what appears to be the control room inside Hoover Dam, followed by the mysterious Delos’ Tower with New York in the distance. Most curious of all, several shots reveal the brand new Golden Age park abandoned and covered in a thick layer of sand, before moving onto the diner Bernard and Stubbs visit later in the episode.

Though Bernard obviously rattles through an awful lot more than just the shots viewers are privy to, these Westworld clues point towards a time far ahead in the future when the Golden Age park has long been shut down, teasing an upcoming time skip. The apocalypse, meanwhile, is connected to both the data inside Hoover Dam and the Tower looming over New York City. Right now, Bernard’s vision is the only common thread between Maeve and Caleb’s narrative (William purchasing Hoover Dam seven years after Westworld season 3) and the largely disconnected “Christina” narrative starring Evan Rachel Wood.

Westworld Season 4 Sets Up Bernard’s Death (Can He Survive?)

According to Bernard’s visions, every version of events where he tries to save humanity ends with his own demise. Presumably, this will happen regardless of whether his mission is actually successful. Given how accurate Bernard’s powers of prediction prove to be throughout Westworld season 4, episode 3, Jeffrey Wright’s Westworld exit seems like a foregone conclusion.

Hosts are notoriously hard to kill, however, so either Hale/William will destroy Bernard’s pearl – the control unit that acts as a robot’s soul – or he’ll be completely scrubbed like Dolores was during season 3. A more tragic possibility is that Bernard will need to destroy himself to save humanity. Westworld already confirmed Bernard is the only remaining key to the Sublime. As long as he’s still lurking around, Delos (and any other Westworld villains) can still access Host Heaven and that coveted Section 16 data. Maybe the only way Bernard can save the human race is by sacrificing himself and taking the key with him… once the time is right, of course.

Either way, Akecheta sets up a potential escape route for Bernard to beat death. He gladly invites Bernard to stay in the Sublime forever with his fellow hosts, and although the offer is refused in favor of taking a chance on mankind, Bernard might be able to avoid a permanent death by transferring his consciousness into Westworld‘s Sublime realm at the very last second.