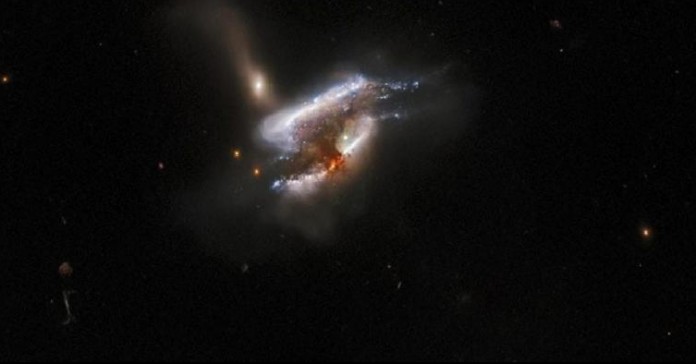 The Hubble Space Telescope of the American National Aeronautics and Space Administration (NASA) has captured an image that will make you say ‘Wow’ when you see it. This visual, which includes the moment when three different galaxies are intertwined, amazed the viewers.
NASA’s Hubble Space Telescope has captured a spectacular moment when three galaxies collide. Also known as the “three galaxy merging,” this event occurs when three galaxies bring each other closer together and tear apart under mutual gravitational forces.

Gases in galaxies collide during such mergers; the resulting condensation creates the conditions for the formation of completely different stars at the center of a new merged mass. In addition, scientists state that the Milky Way Galaxy, which includes the planet we live in, was formed as a result of the merger of other galaxies in a similar way.

The merger seen is 681 million light-years away
In the statements made by NASA on February 18; It was stated that the galaxy cluster captured by the Hubble Space Telescope, which has been sending us images from the depths of space for years, is called IC 2431. It was also added to the explanations that this galaxy cluster is approximately 681 million light years away from Earth.

Astronomers discovered the merging of these galaxies through a public astronomy project, Galaxy Zoo. As part of the Galaxy Zoo project, more than 100,000 volunteers are working on the classification of 900,000 galaxies that Hubble has seen but have not been able to study in detail until now. In addition, it is among the statements made by NASA that the project participants were able to complete a classification work that astronomers could complete for years in 175 days.

Finally, scientists stated that they think that the Milky Way galaxy we are in is moving towards a similar merger. According to NASA researchers, the Milky Way will merge with the Andromeda Galaxy, which is located near us, 4.5 billion years from now.