Home Crypto Striking Predictions for Bitcoin, AVAX and These 8 Altcoins Have Arrived! 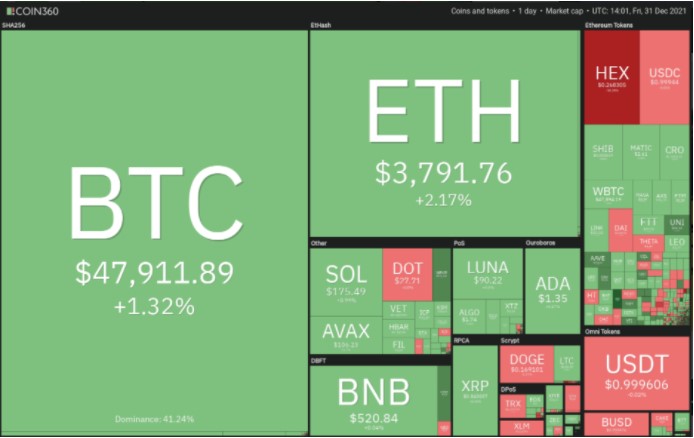 Crypto analyst Rakesh Upadhyay notes that most major altcoins, such as Bitcoin and AVAX, are trying to recover from strong support levels, indicating that traders continue to buy on the dips. Can Bitcoin lead to a strong recovery in crypto markets in the new year? The analyst examines the charts of the top 10 cryptocurrencies to find out. We have compiled Rakesh Upadhyay’s own analysis of cryptocurrencies for the readers of Kriptokoin.com.

An overview of the crypto market

Data from Coinglass shows that 9,925 Bitcoins left Coinbase Pro, Coinbase’s professional trading arm, on Dec. 30, a possible sign of an institutional buyout. This contrasts sharply with the strong entries seen on Binance and OKEx. A few analysts believe institutional buying could rally in January. Economist and trader Alex Krüger expects a Bitcoin rally in early January based on funds flows. He also highlights that January produced positive results for Bitcoin between 2018 and 2021, with gains ranging from 7% to 36%.

MicroStrategy continued to accumulate Bitcoin on the dips as investors debated about the next possible direction of the crypto markets. According to a filing with the U.S. Securities and Exchange Commission, the business intelligence firm purchased 1,914 Bitcoins between December 9 and December 29. The latest acquisition increased the company’s holdings to 124,391 Bitcoins.

If the price drops from the current level or the 20-day EMA, it will indicate that the bears are selling on every minor rally. This will increase the likelihood of a break below $45,456. If this happens, BTC could drop into the strong support zone between $42,000 and $40,000. The relative strength index (RSI) is forming a possible positive divergence, suggesting that selling pressure may ease. If the bulls push the price above the 20-day EMA, BTC could rally to $51,936.33. A break and close above this resistance could start an upward move towards the 50% Fibonacci retracement level from the $55,000 low and then the 61.8% retracement level from the $58,686 low.

If the price drops from the 20-day EMA, it will indicate that the sentiment remains negative and traders are selling in rallies. The bears will then make another attempt to push the price below the support zone. A break and close below the 200-day SMA ($3,365) could indicate the start of a deeper correction to $2,800. This negative view will be rejected if the price breaks and stays above $4,200. ETH could rally to $4,488 later and $4,868 later.

Binance Coin is trying to bounce off strong support at $500. The recovery will likely face selling at the 20-day EMA ($540). If the price drops from this level, it will indicate that the sentiment will remain negative and that traders are selling in the rallies.

The downward sloping 20-day EMA and RSI in the negative zone suggest bears dominate. A break and close below $500 could intensify the sale and BNB could drop to the 200-day SMA ($445). Contrary to this assumption, if the price breaks above the 20-day EMA, the bulls will try to push BNB above $575. If they are successful, BNB could rally to $617 and then to the overhead resistance zone from $669.30 to $691.80.

Solana is trying to bounce off $167.88. The relief rally is likely to face strong selling at the 20-day EMA ($182). The RSI is in the negative territory and the 20-day EMA is gradually falling, indicating that the bears are taking advantage.

If the price declines and dips below the $167.88 support, the SOL could retreat to $148.04. The bulls can try to defend this level, but if the support is broken, the SOL could start its downward journey towards the 200-day SMA ($128). This negative view will be invalidated if the bulls price rise above the 20-day EMA and the overhead resistance at $204.75. The LEFT can then rise to the resistance line of the falling wedge pattern. A break and close above this level could clear the way for a retest of $259.90 ATH.

If they are successful, ADA could rise to the resistance line of the descending channel. The bears are likely to defend this level aggressively. If the price drops below the resistance line, the pair could extend its stay inside the channel for a few more days. A break and close above the channel will be the first indication of a possible change in trend. Conversely, ADA could drop to $1.18 if the price drops from the current level. This is an important level to watch out for because if it breaks, ADA could drop to $1.

LUNA bounced off the 20-day EMA ($81) on Dec. 30, indicating that sentiment is positive and traders are buying on dips.

If successful, AVAX could rally to the downtrend line where the bears might be facing stiff resistance. A break and close above this level will be the first sign that the correction may be over. AVAX could then rise to $128. If the bulls push the price above this resistance, it will complete the reversal head and shoulders pattern. AVAX could first retest its ATH at $147 and then attempt a rally to its pattern target at $177.50. Conversely, if the price breaks from the 20-day EMA and pulls below $98, AVAX could slide back to $75.50.

Polkadot broke below the 20-day EMA ($28) on Dec. 28 and the bears successfully fend off attempts by the bulls to push the price back above the moving averages.

Dogecoin fell below the 20-day EMA ($0.17) on Dec. 28, but the bears failed to challenge the main support at $0.15. This indicates that sales are drying up at lower levels.

The Price May Increase By 50 Percent! In This Joke Coin...