Home Entertainment Stray Review: Finding a Home as one of the best in 2022 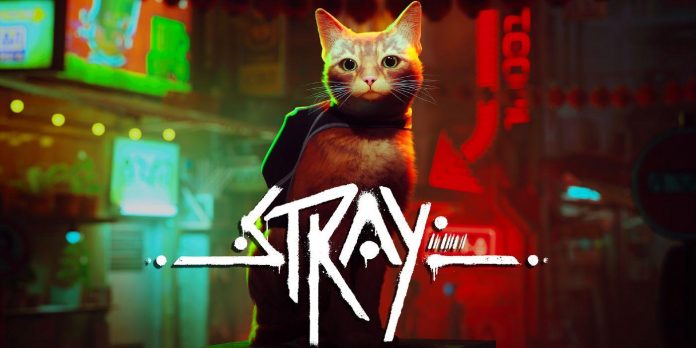 Stray begins in the way any cat lover would hope – with its orange tabby protagonist relaxing alongside their cat companions, taking turns bathing each other before settling in for a nap as purrs gently rumble out from the controller. However, an ensuing storm leads to the cat being separated from its loved ones and dropped into an unfamiliar cyberpunk city. From there, with the help of a robot named B12 that’s befriended at the beginning of the story, players must explore, escape enemies, and learn about the mysterious place’s history and its inhabitants in order to escape.

The game’s world contains several different settings that feel distinctly their own. While the neon-drenched streets that were heavily featured in the Stray trailers are certainly an environment that players will become intimately familiar with, the game contains a myriad of other places to spend time in as well, from the city’s sewers to its very top. Regardless of location, there are always a massive amount of opportunities to learn about the long-forgotten city through exploration. The tabby’s small stature makes the whole world theirs to explore on a level not usually offered by games with more human-like protagonists, as it lets players squeeze through small spaces and climb to great heights.

What players learn as they explore can be tracked through Stray’s Memories system, done through companion B12. This is one of the core features of Stray, tying together the world’s story with the personal one of B12 while also marking milestones in player progress, creating a mechanic that makes exploration truly rewarding. Even outside of the main story, there’s much more for players to do and find within the city, from side quests to delightful interactive details that are there simply for fun’s sake like usable remote controls and readable signs.

Impactful contrast is another keystone of Stray, and comes through in every element of the game. The soft details of the cat next to the rigidity of the robots, the harsh outdoors yet the warmth of individual homes, life or death chase scenes followed by napping next to a playing street musician. Previously touched on in an interview with Stray Producer Swann Martin-Raget, these contrasts and the game’s pacing are all very deliberate as a means to offer the player a consistent mix of action and respite. The types of gameplay vary as the game progresses, with elements of more fast-paced chases and offensive maneuvers sharing fairly-balanced screen time with more deliberate puzzling and stealth, each punctuated with a brilliant soundtrack.

The platforming mechanic of Stray utilizes an approach to movement that aims to negate player frustration over things like tough jumps. Much like their real-life counterparts, the cat protagonist of Stray is incredibly agile, and as such will successfully make every jump command – the player simply has to find spots where the command is available. This puts more of an emphasis on the puzzling of paths than finding the exact timing or angle needed to make a maneuver, which is a welcome addition to the game that helps avoid immersion breaking and encourages long-form exploration.

The protagonist of Stray is based on a real-life cat, and the overall familiarity with felines that the developers have shines through in the game. Although there are of course creative liberties taken throughout the story, Stray feels about as close to a genuine cat experience as players can get. The protagonist’s movements and reactions, like leaping backwards at surprising noises and struggling to adjust to wearing clothing, alongside trademark cat activities like knocking objects off the edges of surfaces immediately ring true to any player familiar with the species. Players can also do things like utilize the adaptive triggers to scratch furniture and walls, press a dedicated meow button, and rub up against robots they’ve taken a liking to.

The world and tone of Stray are perhaps darker than some players would expect out of a cat-driven game, but not in an unwelcome way. Both the dystopian environment of the game and its inhabitants have a tragic past that players will unravel, discovering truly unsettling details and places along the way. The story offers meaningful observations on greed, AI, and humankind, and manages to create genuine emotional connections between the cat and other characters that may even cause players to shed some tears by the end of the title. However, there are still plenty of moments of levity provided by dialogue and interactions with the environment that keep the game from feeling too heavy.

Stray is a nearly perfect title, although it does contain a few small flaws. It can occasionally be a bit frustrating to line up the protagonist exactly in the correct spot for where the player wants them to go, requiring a series of micro-movements to realign with the position where the jump icon will reappear. There are also a few visual glitches in the game – mostly near the later hours of the title – like stuttering or brief issues with the camera, but nothing that has a lasting impact on the game. It’s possible that Stray may not be as long as some players may be hoping for, clocking in at around 10 to 12 hours for those who truly make a point of exploring every nook and cranny, but the game’s $30 price tag helps reduce the sting of the shorter runtime.

Stray is a visually-stunning masterpiece of science fiction that seamlessly interweaves its features into a truly wonderful experience. It’s a game meant to be savored, with a breathtaking, interactive cyberpunk world and meaningful story that hits all the right notes. Although particularly purr-fect for cat lovers, Stray is a solid adventure bound to please any player that wants to play as a hero with a different perspective than what video game protagonists typically offer.