Home Celebrity Stray Kids surprises with the tracklist of SKZ2021, their next album 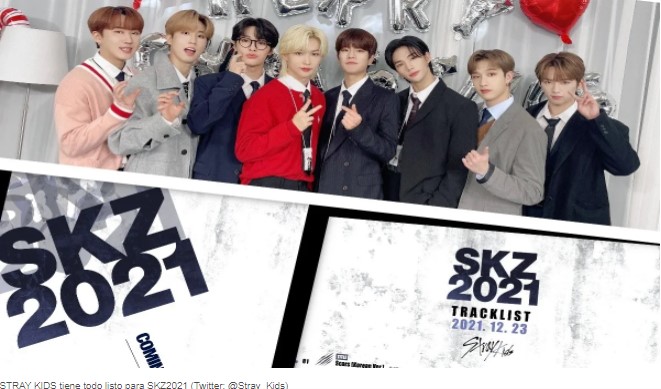 STRAY KIDS wants to close the year in the best way, and there is nothing more perfect than ending it with new music for STAY, so they will have their comeback with SKZ 2021 and they have already revealed their tracklist.

This has been a great year for STRAY KIDS, perhaps at first it seemed to have difficulties, since Hyunjin had to leave the group, even so, the other members gave their best of each in their participation in the program ‘Kingdom’, where they were as winners.

After that the success was gigantic for the boy band, SKZ revealed a new album that everyone would love and with ‘NOEASY’ they showed a new facet and also great power and dominance in the industry; this album turned the idol group into a Million Seller.

It seemed that STRAY KIDS would take a good rest after achieving great success with their album, but no, they had their Japanese comeback with ‘Scars’ and at the end of November, they brought Christmas forward for STAY releasing ‘Christmas EveL’, a special single with 3 new songs that made his fans happy.

And now yes, SKZ would take a break, right? Well, the truth is that no, the K-Pop band surprises us once again and prepares the world for a new adventure with their next album ‘SKZ2021’ which already has a list of songs: 0.

Just one day after the small announcement by STRAY KIDS about a new project called ‘SKZ2021’, the idols surprise with the complete tracklist of this next album, in their song list we can find the Korean version of ‘Scars’, for example, although the others are new versions of previous songs.

As STAY knows, SKZ used to have 9 idols, but Woojin left the group with only 8 remaining, the songs that were released with the original lineup, were re-recorded with the new STRAY KIDS lineup and will now be OT8 versions.

Have you got everything ready for this new STRAY KIDS album? It is surprising that idols do not get tired of working and release the best music for their fans and all the public who decide to join STAY: 0.

The date on the STRAY KIDS SKZ2021 poster and tracklist tells us that the K-Pop group’s next album would be out tomorrow, December 23 at 6 PM South Korean time, maybe this is just a digital release, since this new album has not been put on pre-sale.

These new versions of SKZ’s songs will have all the power and energy of idols with new arrangements and more, STAY can’t be more than happy.

In other STRAY KIDS news, do you know what the SKZ show I had before debuting was called? That’s how we saw them earn their place in the boy band.

“Danger!” Controversies and hilarious moments over the years: from winning $1...

“I was still holding out my hand” — Kim Kardashian talks...