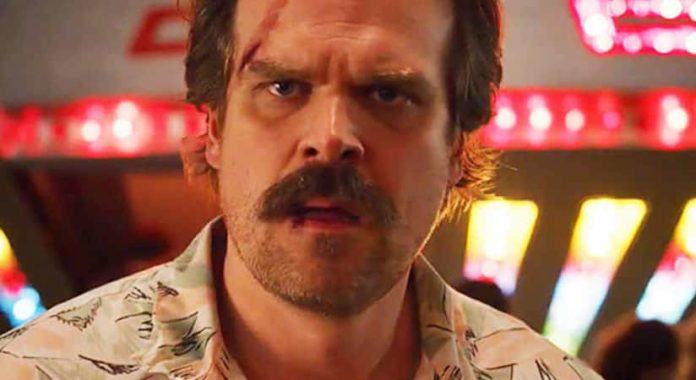 HOPPER DEAD IN SEASON 3?
This summer, Stranger Things fans got to see season 3. Eleven, Mike and the other characters grew up well, and some even dated. However, this caused some arguments among the group and they had to face a major danger in the city. However, Hopper did not hesitate to sacrifice himself in order to save Eleven and he did an act of bravery. Nevertheless, since the end of the season, fans have been wondering if Hopper is really dead.

The fans of Stranger Things want to remain optimistic about the survival of Hopper. And for good reason, his body was not found and this gave rise to many theories. A few hours ago, Netflix released a first trailer for season 4. It seems that the fans were right since Hopper is still alive! However, fans will not see him again at Hawkins!

From Russia with love… pic.twitter.com/ZWEMgy63Et

STRANGER THINGS: HOPPER STILL ALIVE BUT IN DANGER!
This Friday, February 14, the Netflix channel posted a video of season 4 of Stranger Things . Thus, on the tweet, we can see written: “Good kisses from Russia” . The new season is set to take place in Russia and fans will have a slightly darker season. Indeed, in the trailer, we find ourselves in a gulag and we can see several prisoners. In addition, just before the end of the video, we can see Hopper’s face and it seems that the character is still alive.

However, Hopper may well be in trouble in season 4 of Stranger Things. Indeed, the character is one of the prisoners of the Gulag and one wonders how he could have landed there. In addition, he has a shaved head and does not look very healthy. We can already start to worry about this character and hope that he stays alive throughout this season. Finally, we wonder how Eleven will find it. What is certain is that fans will see brand new landscapes for this new season.

Anastasiya Kvitko Wore A Stunning Top And An Unlimited Fit