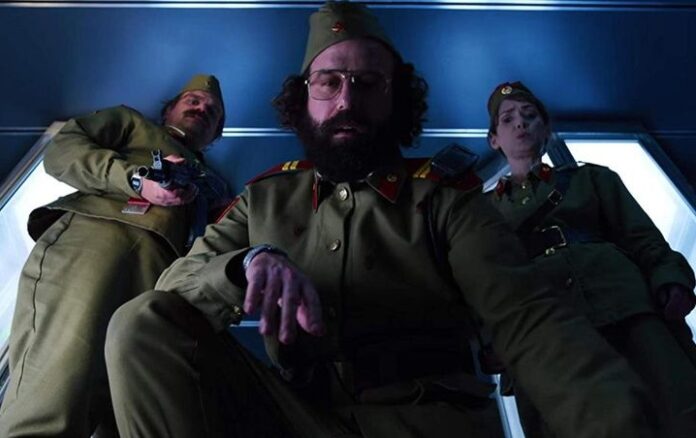 Ever since Stranger Things season three came to an end, viewers have been speculating on what the plot of the upcoming series might entail , and it could be a creepy ending for private investigator Murray Bauman .

Murray (played by Brett Gelman ) was first introduced in the second season of Stranger Things and is said to be a regular series in the upcoming fourth installment.

ok but you gotta admit he really was a nice guard

Murray struck up an unlikely friendship with Russian scientist Alexei (played by Alec Utgoff) as he observed the dubious Russian activity taking place at Hawkins.

Most recently, Brett has been seen filming scenes alongside his co-star Winona Ryder, who plays Joyce Byers, in Lithuania, and it is believed that the location will act as the backdrop for the couple’s mission to rescue Sheriff Jim Hopper (played by David Harbor) from his new Russian prison.

And some Netflix fans think this is how Murray ends up dead and led Reddit to debate the theory.

Redditor Tesgoul published: “I think the next to die is Murray. His death will be sad, but not too much because he is a secondary character. He is the perfect target. ”

The fan continued: “Do you remember in the second season when I had already suspected a Russian invasion at Hawkins before everyone else found out?”

“Maybe that doesn’t count, but he was there in the mall when the Russians took Hopper away, and now with voicemail for Joyce there is a chance that he will find out or find out what the Russians have done with Hopper as well. guy knows too much about the enemy, “they concluded.

Who else could die in Stranger Things 4?

However, other fans of the Stranger Things show pondered whether it could be Steve Harrington (Joe Keery) or the parents of Nancy Wheeler (Natalia Dyer) who could be killed.

One person wrote: “Of everyone in general, I think I am concerned that Steve will be killed more, since he is loved by almost everyone and often shows that the idea of ​​killing characters for the simple fact of doing it and for a purely emotional effect.”

these three offer you free ice cream for life in exchange for your help fighting evil russians. are u in?

The speculation comes after one of the show’s stunt bosses joked about the fourth season being “darker, more epic, and full of surprises.”

Hiro Koda told ComicBook.com: “All I can tell you is that season 4 is … It’s darker. There are so many great surprises and all your favorite people are in it. It is going to be very good. It is very epic. Now I have to read almost eight scripts, so it’s pretty impressive. I don’t know how many we are going to get, “he added.

A GTA Online fan patch will be released