Home Celebrity Stranger Things: David Harbour was sure it would be a flop 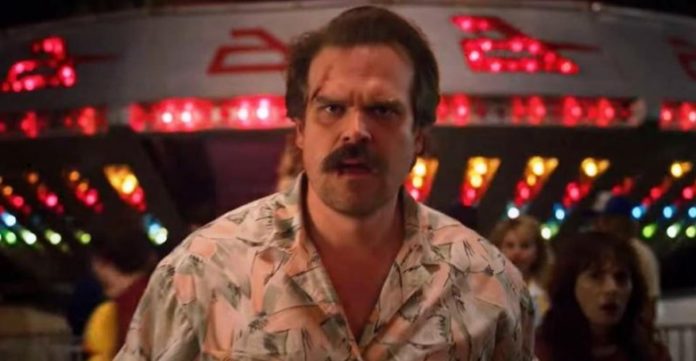 In 2016 Stranger Things debuted in the Netflix catalog and in a few weeks it became one of the biggest hits of the year. Actor David Harbor, who played in the TV series by Hawking police chief Jim Hopper, was one of the people who was more surprised by the public response, as he feared that the whole project would prove to be a flop.

Whether we like it or not, thanks to a group of very talented young actors, the first season of Stranger Things has nevertheless managed to remain in the hearts of the spectators. It has nothing to envy of other sci-fi series, even if it is not anchored to the genre, on the contrary: the detachment, as far as I can tell around, is felt every season more.

A few days ago, on the occasion of the Late Show with Stephen Colbert, the actor David Harbor, born in 1975, spoke of the unexpected success of the popular TV series: “Before the debut I was sure that Stranger Things would prove to be a complete failure. I remember that when filming was still going on, I and the rest of the cast talked about how terrible it would be, mainly because of my performance: I had the impression that I was sinking the entire show myself. ”

The actor then revealed: “And then, before the debut, it is normal to see some publicity around. I live in New York, I looked around and yet I didn’t see any publicity. Not a single manifesto. I remember talking about it with a friend who works on a successful television program. “No advertising,” I told him, “I imagine we have implemented a new type of promotional campaign.” And he replied that he didn’t think the same way, on the contrary: that was a technique to bury the show. He replied: “They hate him and are trying to make sure that nobody looks at him.”

And then Stranger Things made its debut and from one day to the next it became the series of the moment. At Late Shoe, the actor also talked about the unexpected success: “I had a driver’s number on my phone book, which he wrote to me after ten years” I saw Stranger Things. It’s great! “It was then that I really realized that the TV series had actually taken off.”

Nicole Neumann Makes Your Day With The Best View