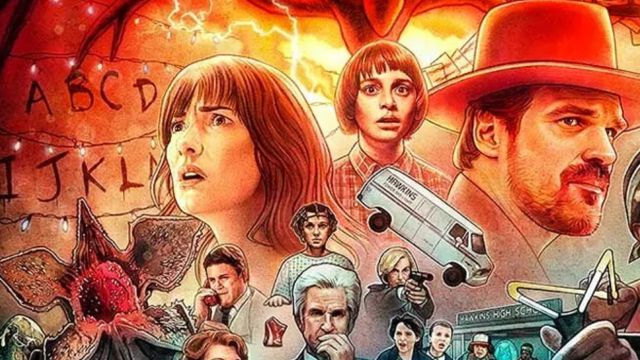 Stranger Things 4: The actor who plays Sheriff Hopper, David Harbor, anticipates that the series finale will explain all the mysteries. The return of Stranger Things will occur in 2022, although there is still no more specific date. Netflix is ​​working hard on season 4, which has been shown in videos and in some informational snippets. Actor David Harbor, Sheriff Hopper in fiction, has been present at New York Comic Con, where he has made some interesting statements about the series. As he has suggested, the new chapters will reveal secrets for which clues have been previously provided.

In the statements, collected by EW, Harbor ensures that season 4 is “the deepest seasons” they have done so far in regard to the character of Hopper. He mentions “the boxes in the attic” that point to the sheriff’s past. “We started to uncover those truths that we have anticipated before,” he has said. Also, there will be many action scenes. “Action at a level we’ve never done before.”

In season 4 of Stranger Things, viewers will travel beyond Hawkins, the town in which the story has been set so far. Besides Russia, there will be other interesting locations. On the other hand, Harbor has taken the opportunity to compare the series with another successful fiction, Lost. “What we’re trying to do, as we build this thing, is look back and make sure we don’t have an ending like Lost”, like “what happened to the polar bear?” He jokingly said. .

Casa Creel is a new location that introduces a completely new character to the Stranger Things universe. This is Victor Creel, played by Robert Englund, the baddie from A Nightmare on Elm Street. Victor is confined to a mental hospital because he murdered his family. In that sense, the interpreter behind Hopper tells us more about the connection between this character and the Upside Down World.