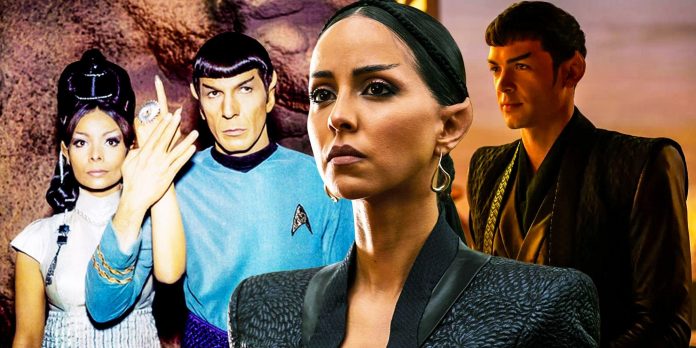 In the canon of Star Trek: The Original Series, it is said that Spock (Leonard Nimoy) and T’Pring (Arlene Martel) officially end their Vulcan marital ties in the classic episode “Time of Madness”. Spock, who had passed pon farr, was forced by T’Pring to return to Vulcan so that she could break off their engagement with the help of the kal-if-fi ritual. But instead of forcing Spock to fight her new lover Stonn (Lawrence Montaigne), T’Pring tricked Captain James T. Kirk (William Shatner) into fighting Spock. In the end, T’Pring got what she wanted, and her engagement to Spock was broken off forever. However, despite this tragic ending, Strange New Worlds explores the younger Spock and T’Pring in happier and more hopeful times, when two Vulcans try to strike up a long-distance relationship almost a decade before the “Time of Madness” and their relationship demise.

However, episode 7 of Strange New Worlds laid the groundwork for a possible divorce between Spock and T’Pring thanks to the machinations of Captain Angel. Angel took Spock and nurse Kristin Chapel (Jess Bush) as his captives while they negotiated (in vain) with T’Pring to exchange Spock for Saybok, who went by the assumed name Xaverius. In order to spare T’Pring the impossible choice of surrendering the Saybok, because it would disgrace T’Pring in the eyes of Vulcans and end her career, Spock and Nurse Chapel pretended that they were having an affair. This gave T’Pring a convenient excuse to break the marriage bond with Spock, thereby saving her from having to free Saybok to save Spock’s life. The gambit worked, and Captain Angel was thwarted.

Although T’Pring knew that Spock was only pretending for her good, and the two Vulcan lovers were “reunited,” there are many interesting aspects to Spock’s fake “romance” with Nurse Chapel. This establishes the fact that T’Pring herself will have an affair in 2267, and “Strange New Worlds” even re-introduced Stonn (Roderick McNeil), T’Pring’s future lover. In fact, it’s now obvious that since Stonn works so closely with T’Pring every day at Ankeshtan K’til, that’s how they fell in love with each other in Spock’s absence. In addition, Spock dreamed of the exact scenario of the “Time of Madness” in the 5th episode of “Strange New Worlds”, “Spock Amok”, and just two episodes later another identical circumstance of his future divorce from T’Pring played out.

There is also the unwitting role of poor Nurse Chapel in the ongoing soap opera Spock and T’Pring. Chapel obviously has feelings for her Vulcan shipmate, although she claimed she didn’t, because Kristina didn’t want to get into Spock and T’Pring’s relationship any further than she already is. Nevertheless, there is an undeniable attraction between Spock and Chapel, especially since, like Stonn and T’Pring, Christina has the opportunity to see Spock every day on the Enterprise. Obviously, the Star Trek: Strange New Worlds creative team is well aware of how Spock and T’Pring’s romance ends, and they are strongly inclined to hint at what is going to happen, even though Spock’s divorce will not happen for another 8 years.

Check Out How To Use The Interactive Map Of Genshin Impact