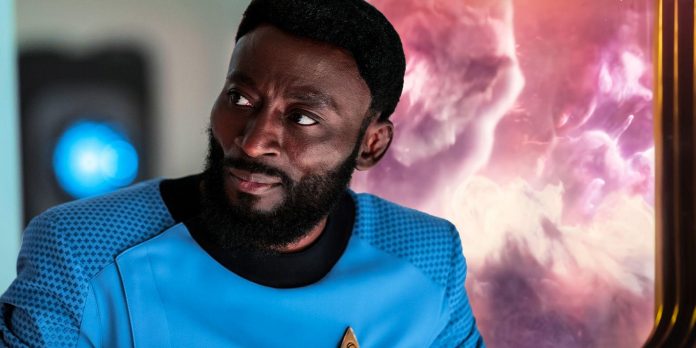 In episode 8, “Star Trek: Strange New Worlds,” the USS Enterprise meets its first space god in the 23rd century, and the show even offers a compelling explanation of the cosmic being. In the eighth episode of the series “Strange New Worlds” called “The Elysian Kingdom”, the starship Enterprise and its crew turn into fairy-tale characters from a bedtime story that Dr. M’Benga (Babs Olusanmokun) reads to his little daughter Rukia (Sage Arrindell). he is dying of terminal cygnocemia. But Rukia’s life is saved by an intelligent being in the Jonesian Nebula, who has extraordinary power over reality. This makes “Debra,” the name Rukia gave to the cosmic force in honor of her late mother, chronologically the first cosmic god the Enterprise has crossed paths with since Strange New Worlds is a prequel to Star Trek.: The Original Series.

Classic “Star Trek” directed by Captain James T. Kirk (William Shatner) He was known for the fact that the Enterprise met with several almighty cosmic gods. Kirk’s Enterprise literally met Apollo (Michael Forrest) and learned that the Greek gods are actually aliens who came to Earth in the distant past. Kirk also dealt with Organians who evolved beyond their bodily forms and used their power over matter and reality to stop a potential war with the Klingons. Kirk was also forced to fight the horns on Cestus III in a contest staged by the seemingly omnipotent Metrons. These are just some of the cosmic deities inhabiting the Star Trek galaxy, although most of them have not been seen since the 23rd century. Star Trek: The Next Generation featured many cosmic gods, but the series made Q (John de Lancey), an omnipotent being from Q Continuum, a beloved recurring character who later returned to change reality in the second season of Star Trek: Picard. Meanwhile, the Prophets, the gods of Bajor, played a central role in Star Trek: Deep Space 9, and Captain Benjamin Sisko (Avery Brooks), a Bajoran emissary, ended the series by becoming a demigod existing in non-linear time.

Before Dr. M’Benga met Debra face-to-face in episode 8 of Strange New Worlds, chief engineer Hemmer (Bruce Horak) suggested that the essence of the Jonesian Nebula was the result of a theory called the Boltzmann brain, which is a spontaneously generated consciousness. As M’Benga summarized: “Once out of nothing, an omnipotent being is simple… appears.” This seems to have taken place in the Jonesian Nebula, as Debra manifested herself as a consciousness capable of distorting reality, but devoid of a physical body. When Hemmer used his Aenarian telepathy to accept Debra’s consciousness, M’Benga learned that the cosmic being had taken Ruikya as a friend and created a fantasy for her based on her fairy tale, turning the Enterprise team into characters from the Elysian Kingdom.

Thanks to the “Debra”, Rukia can now exist outside of her terminally ill physical body, and the essence of the nebula even allowed Rukia to become an adult (played by Makamba Simamba). But the catch is that Rukia has to stay in the Jonesian Nebula with Debra and will never be able to return to her physical body, as she will die. Dr. M’Benga also had to make an impossible choice to let Rukia go and change her fate, knowing that his daughter would live as a cosmic being instead of letting the Enterprise remain trapped inside the Jonesian Nebula and Rukia’s fairy tale. In a way, the symbiosis between Rukia and Debra resembles the bond that formed between Zephram Cochran (Glenn Corbett) and the Companion that kept Cochrane from aging in the TOS episode “Metamorphosis”.

RHOA: Kandy and Marlo are apparently throwing shade at Each other...