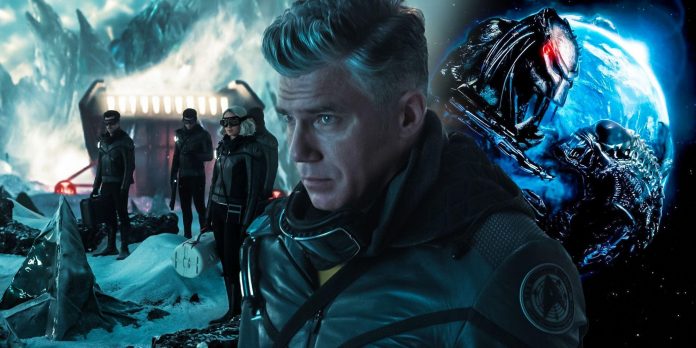 Horn returns in a terrifying form in the 9th episode of Star Trek: Strange New Worlds, but the revelations about alien reptiles borrow too much from the films Alien and Predator. In the 9th episode of Strange New Worlds, “All Those Who Wander”, Captain Christopher Pike (Anson Mount) leads a landing party to the frozen world of Valeo Beta V to investigate a distress signal from the aircraft carrier Peregrine. The crew of the USS Enterprise is being chased by Baby Horn, who infected one of the survivors. The horror-themed episode ended with the tragic sacrifice of chief engineer Hemmer (Bruce Horak), who committed suicide to save his friends because a Horn was growing inside him.

In the first season of the series “Strange New Worlds”, the Bugles are again presented as formidable opponents of Starfleet and the United Federation of Planets. Lieutenant La’an Nunien Singh (Christina Chong) and her family were abducted by the Bugles when she was a child. Gorn ate her parents and brother, but they allowed La’an to escape, expecting that she would not survive. Instead, La’an was saved by Una Chin-Riley (Rebecca Romayne), who inspired her to join Starfleet. Despite the fact that La’an is also a descendant of Khan Nunien Singh (Ricardo Montalban), the Horn was the main center of the tragic prehistory of La’an. The Enterprise’s security chief also became Starfleet’s expert on bugles, which La’an aptly called “monsters.” Through La’an’s memories, Strange New Worlds retconned the Bugles, which previously could only be seen in Star Trek: The Original Series and Star Trek: Enterprise.

Gorn attacked the starship Enterprise in the 4th episode of Strange New Worlds, “Memento Mori”, and it was the combination of La’an’s knowledge of reptiles and Captain Pike’s tactical courage that allowed them to survive. However, the Bugle was not seen in episode 4, and episode 9 of Strange New Worlds marks the first time a rebooted Bugle was seen in canon in the 23rd century, as Strange New Worlds predated TOS by about 7 years. While the Bugle has turned into a really scary threat, the changes in “Strange New Worlds” are also strangely derived from other sci-fi franchises.

Horn’s retcon in episode 9 of “Strange New Worlds” is too heavily borrowed from Xenomorphs from the Alien franchise. The crew of the Enterprise, to their horror, discovers that baby Horn is hatched inside the bodies of the hosts, and then breaks out, killing their carriers, just as young xenomorphs should have been. One change is that bugles are natural chameleons that can evade Starfleet tricorders and sensors. But after birth, the Bugle babies become mindless killer animals that climb walls and hide in ceilings like alien xenomorphs. The Bugles also quickly turn on and kill each other, fighting for dominance until there is only one alpha left. Bugle can also see in the dark, and their ability to sense heat signatures is very similar to the Yautja from the Predator franchise.

In addition, in order to infect other species and implant their cubs, baby Horn spits bile, which is also similar to the dilolophosaurus in the Jurassic Park films. Bugles also chase their prey like velociraptors. Hemmer was caught by Gorn’s bile, which instantly infected Aenar with Gorn’s eggs. Baby Bugle’s growth process is also determined by the host; with some alien species, it may take a few days, but in Strange New Worlds, baby Bugle aged quickly in a matter of hours.

Why changing the Bugle in Strange New Worlds doesn’t work

The Bugle retcons from Strange New Worlds actually turn the aliens into the horrible monsters La’an describes, which made for a tense, action-packed episode 9. But in the grander scheme of how the Hegemony of the Bugles should act, the Bugle from Strange New Worlds retcon logically does not stand up to criticism. As they are represented in “All Those who Wander”, bugles are predatory, animal creatures. But how, then, is Gorn able to build spaceships and travel the galaxy? Perhaps the intelligence of the bugles develops as they grow up, but how does their civilization flourish if they kill each other at birth and deplete their population?

The Bugle warrior that Captain James T. Kirk (William Shatner) encountered in the Arena episode of Star Trek: The Original Series was a humanoid reptile that was supposed to become a monster (despite the limited and ridiculous lizard costume from the era). But the Bugle Captain was also smart, talked, was a skilled tactician and had a code of honor. The Bugle Kirk he fought in TOS is very different from the mindless animals in Strange New Worlds, and it doesn’t quite match up with the fact that they are the same species. The 9th episode of Strange New Worlds also features the long-repeated mantra that “no man has ever seen a bugle” out of the water.

How I Met Your Father: Know Who’s Who In The Series’...

BLACKPINK’s Rosé admits she once lost her passion for music