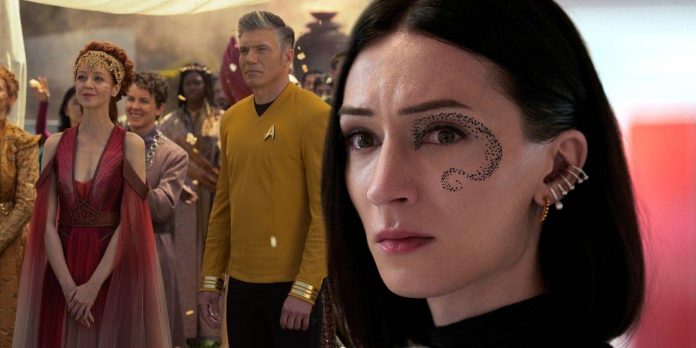 Star Trek: Strange New Worlds takes the same villainous turn twice in a row, but in true Enterprise style turns this flaw into an unlikely strength. In the 6th episode of “Strange New Worlds” (“Lift us up to where suffering cannot reach”) Lindy Booth is introduced as Alora, a minister from Majalis seeking help from Captain Pike’s Enterprise after being attacked by nefarious criminals. Alora is treated as a guest of honor, and she even looks into Pike’s logbook, but “Strange New Worlds” shockingly reveals her as the episode’s secret antagonist. Alora and the other residents of Majalan sacrifice children to support their society, and although Pike can do little but stare in horror, he leaves in disgust.

Episode 7 (“Serene Squall”) brings a distinguished guest aboard the Enterprise again—this time a humanitarian worker named Dr. Aspen, played by Jesse James Keitel. Like Alora, Aspen’s charitable efforts are hampered by petty criminals, and Pike’s enterprise is soon attacked by their new friend’s tormentors. Just as Alora gravitated to Pike in episode 6, a bond is brewing between Spock and Aspen, whose personalities echo in ways T’Pring could only dream of. However, in the biggest parallel between episodes 6 and 7, Star Trek: Strange New Worlds reveals that Dr. Aspen is actually a villain hiding in plain sight and the episode’s secret antagonist.

Identical betrayals can be found in all eras of Star Trek… but rarely in adjacent episodes. Revealing Captain Angel as a secret villain after they formed a blossoming bond with a member of the main crew, Strange New Worlds can’t help but inspire deja vu after Alora had gone the same way just one episode before. Star Trek: Strange New Worlds does not give the impression of unoriginality and lack of creativity, but avoids this narrative echo, each time using a twist in a completely unique way. Alora posed an ethical problem to Captain Pike: is paradise worth a child’s life? Although the answer is obviously an emphatic “no,” Alora and her people firmly believed the opposite, which made her a philosophical enemy, not an “enemy enemy.” Captain Angel of the Serene Squall in Episode 7 “Strange New Worlds” is not just an ethical problem, it’s a problem, period. A heartless and ruthless criminal determined to achieve his goals by any means necessary, Captain Angel is a more traditional villain compared to Alora’s spiritual duplicity. Angel is a real “enemy—enemy” in the classic form of “Star Trek”.

If Alora started firing phasers and swore death to the Enterprise if the sacrifice of children on her planet did not take place, or if Captain Angel was a morally ambiguous type who would hurt people only if absolutely necessary, Strange New Worlds would never get away with omitting exactly the same turn side by side. But when Alora and Angel are at completely different ends of the spectrum of Star Trek villains, deja vu becomes a strange quirk, not a negative flaw.

On closer inspection, the eerie similarity between episodes 6 and 7 of Strange New Worlds may explain why the Enterprise falls for Captain Angel’s trick. Faced with Majalis’ resistance, Pike and his team learned that “enemies” sometimes have justifiable motives behind their actions. Thus, faced with the pirates of the Serene Squall in the next episode, Pike does not immediately feel in danger and even prepares food for his kidnappers to provoke a semi-peaceful mutiny. The Enterprise does not realize the level of threat that the Serene Squall actually poses until Captain Angel’s pirates overthrew the 400-man crew with amazing ease. It can be said that the fact that he was too hasty in condemning the Majalis rebels weakened Captain Pike’s vigilance, and the Angel took advantage of this by grabbing the Enterprise from under his nose. Such interconnected details justify the repetition of the 6th and 7th episodes of Star Trek: Strange New Worlds… until, in the 8th episode, a guest appears on board the Enterprise, who makes eyes at number one before revealing himself as the main villain.

Halo Infinite Will Be Compatible With Dolby Vision And Dolby Atmos...