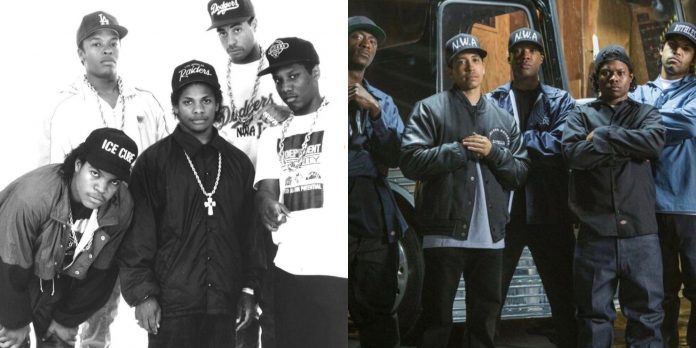 There have been dozens of biopics about bands, but in 2015 a film was made about the world’s most dangerous group: N.W.A. Straight Outta Compton was released in 2015 and was directed by F. Gary Gray, the director behind films like Friday, The Negotiator, and Set It Off.

The film showed the origins of the group while also diving into the personal lives of Ice Cube, Eazy-E, Dr. Dre, MC Ren, and DJ Yella. Like most biopics, Straight Outta Compton mixes facts with fiction in order to create a more coherent and cinematic experience.

Updated on July 8th, 2022, by Stuart Kilmartin: With musical biopics like Elvis and Tick, Tick…Boom! keeping the tradition of musical biopics alive and well on the big screen, now’s a perfect time to revisit one of the best musical biopics of the 21st century: Straight Outta Compton. Did Ice Cube really destroy his manager’s office? Did Eazy E really want to kill Suge Knight? The story of N.W.A. is wild and unbelievable in many ways, and the movie captures some of the band’s craziest moments, but it also takes a number of artistic liberties in adapting their story. Many of these stories about the band live on in infamy to this day.

After Ice Cube left N.W.A, he was signed by Priority Records for a solo deal. Bryan Turner, the co-founder of Priority Records, was one of the men responsible for signing Ice Cube to his label. At one point, Turner offered to pay Cube extra on his second solo album if the first one was a hit.

After Cube turned AmeriKKKa’s Most Wanted into one of the most memorable albums of the 90s, Turner didn’t keep his promise to pay Cube extra money. In return, Ice Cube destroyed Bryan Turner’s office with a baseball bat. This is depicted in Straight Outta Compton and one scene that O’Shea Jackson Jr. fought to keep in the film because of how accurate it actually was (via The Chicago Tribune).

A huge part of the film is Jerry Heller, played brilliantly by Paul Giamatti in one of the actor’s best performances, discovering N.W.A and helping them become a hip hop group known all around the world. Towards the middle of the film, Ice Cube becomes irritated that Heller only seems to be catering to Eazy-E, despite Cube writing most of the songs on the Straight Outta Compton album.

In reality, Ice Cube did actually leave N.W.A. over a royalty dispute with Jerry Heller. In an interview with The Guardian, Cube explains that his future manager Pat Charbonnet helped him realize that he was getting the short end of the stick when it came to Ruthless Records and his deal with Jerry Heller.

In one of the more dramatic parts of the film, Suge Knight beats up Eazy-E in order to get Dr. Dre out of his contract with Ruthless Records. This happened in real life and like in the movie, Eazy wanted to retaliate by killing Suge. Jerry talked Eazy out of retaliating in this way against Suge (via Consequence), which Heller later revealed that he regretted.

The Drama At The Detroit Show

One of the biggest scenes in Straight Outta Compton is when N.W.A. perform the song “F*** tha Police” despite the Detroit Police Department specifically telling them that they couldn’t. The undercover police officers begin to storm the stage, which results in a chase between law enforcement and the band and the ultimate arrest of N.W.A.

RELATED: 10 Lessons We Can Learn From Straight Outta Compton

This scene is mostly what happened in real life. When the band played the song, the amplifiers were turned off at the venue, which did actually incite riots from the concert attendees (as reported by XXL in 1989). The only real difference is that in real life, N.W.A. was able to escape and make it back to their hotel, where they got arrested later in the night.

The FBI Went After The Group

The police were obviously not fans of N.W.A. but at one point the band receives a letter from the FBI, which Jerry calls a “reasonably worded threat”. This is one monumental moment in N.W.A.’s career that most certainly happened (via The Daily Beast). FBI Assistant Director Milt Ahlerich was the man who wrote the letter and sent it to Ruthless Records. As stated in the film, the letter read, “Advocating violence and assault is wrong and we in the law enforcement community take exception to such action” and that “recording such as the one from N.W.A. are both discouraging and degrading to these brave, and dedicated officers.”

The FBI later had to fix Ahlerich’s mistake and explained that it would be inappropriate for the government to revoke the First Amendment from the band. The letter from the FBI to N.W.A. is currently on display at the Rock & Roll Hall of Fame in Cleveland.

Things In Straight Outta Compton That Were Fictionalized

“Bye Felicia”, which was originally spelled “Bye Felisha”, was a slang term that originated in the 90s after the film Friday was released. The 1995 film was coincidently directed by Straight Outta Compton director F. Gary Gray and written by Ice Cube and DJ Pooh.

In the film, Ice Cube dismisses a woman who constantly mooches off of people in the neighborhood by saying the phrase. A same type of scenario happens in Straight Outta Compton when Ice Cube pushes a naked woman out of their hotel room and says, “Bye Felicia” in one of the movie’s best quotes. While the line was a funny way to pay homage to the 90s term, it didn’t actually become known until Friday was released (via The Cut).

The Origin Of F*** The Police

It’s no secret that N.W.A did not like the police and most police officers at the time didn’t like them. At one point in the movie, the members of N.W.A. step outside of their Torrance studio and start to get harassed by two police officers. Jerry Heller confirmed that this actually happened in his memoir (via The Guardian), but it wasn’t the inspiration behind the song “F*** tha Police”.

RELATED: 9 Songs That Made A Comeback Due To Its Use In Recent Movies And TV

Ice Cube had the idea for quite some time before that, but since Dre had to go to prison on the weekends for traffic infractions, he didn’t want to do the song right away. Once Dre had served his time and Ice Cube revisited the idea, Dre was ready to go. So harassment from the police obviously inspired the song, just not the way it played out on screen.

N.W.A. Got Back Together

After N.W.A was broken up, Eazy-E had long-standing feuds between Ice Cube and Dr. Dre. Prior to Eazy-E getting diagnosed with AIDS, something which the movie deals with powerfully, Eazy-E had begun to rekindle his relationships with his former band members, but nothing ever really came to fruition. Eazy died only a month after he tested positive for HIV (news report via Youtube) so any plans they were forming never actually happened.

In the film, Eazy-E is shown meeting with MC Ren and DJ Yella, who are all waiting for Ice Cube and Dr. Dre to get there. This never actually happened as Eazy’s death came too suddenly for them to actually start working together again. That being said, Dr. Dre and Ice Cube both think that they would have made more albums as N.W.A. if he hadn’t passed away.

In Straight Outta Compton, Dr. Dre is seen entering a few relationships. However, his treatment of women was actually much worse in real life. Several people have accused Dre of becoming violent against them, most notable news reporter Dee Barnes and singer Michel’le. While Barnes filed a multi-million dollar lawsuit against the artist, Michel’le didn’t take any legal action.

While Dre faced repercussions in the 90s for assaulting Barnes, he has since made several apologies, most notably to Rolling Stone magazine, where he stated, “I made some f***ing horrible mistakes in my life. I was young, f***ing stupid. I would say all the allegations aren’t true — some of them are. Those are some of the things that I would like to take back. It was really f***ed up. But I paid for those mistakes, and there’s no way in hell that I will ever make another mistake like that again”.

N.W.A. breaks up in the film after Dr. Dre and Ice Cube both go solo because of the abuse from Jerry Heller. Instead of sticking with his band, Eazy-E sides with Heller, which causes him to foreclose his home, package marijuana, and move into a smaller house.

In reality, none of this actually happened. When Eazy-E passed away, he was still a multi-million dollar artist (via Phoenix New Times) and in the 90s there was never any news reports about Eazy-E having to sell his mansion. Eazy-E may have not been making as much money after his days with N.W.A. were over, but he was no doubt still a very rich artist.

Every returning and new MCU character is confirmed in She-Hulk (so...

Call of Duty will be part of the Xbox Game Pass,...