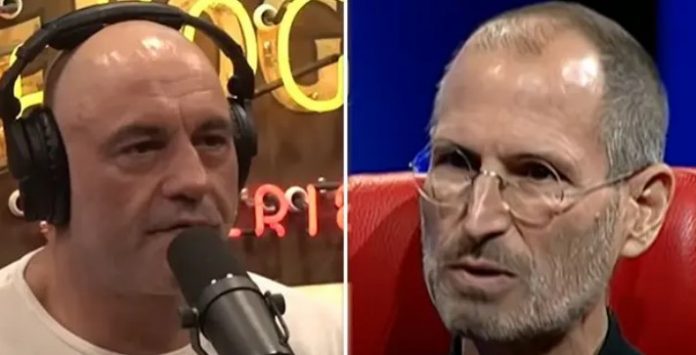 Artificial intelligence is taking social media by storm with tools such as Dall-E Mini, allowing netizens to create original works of art based on a series of simple text prompts.

More recently, Dall-E 2 from OpenAI became available for use by registration without a waiting list, and users across the network used AI to create stunning conceptual images in a more complex and accurate way compared to its mini-version.

However, there is another artificial intelligence tool that hits social platforms and is able to recreate realistic conversations using pre-existing human recordings.

A tool called the AI Podcast recently posted a fake episode of The Joe Rogan Experience podcast with special guest Steve Jobs—the late CEO, co-founder and chairman of Apple, who passed away in 2011.

The recording begins with Joe Rogan welcoming his “ugly bitches” to the “Bro Jogan Experience” and then introducing Jobs, whom he finds “weird and brilliant” with “amazing taste.”

“It’s nice to be on the show,” says the AI—created Jobs. “Your audience is very different from your regular Apple users, and that’s a good thing. That’s cool.”

ai generated voice of a person, who did not provide consent, in a podcast saying things that person never said — pretty straightforward evil thing to do. is there a reason we’re not all on the same page with this stuff yet?

While a short snippet of the conversation was posted on Twitter, the entire 19-minute episode can be viewed on the ai podcast website, where the two figures exchange laughter, banter and stories of technology and MacIntosh.

The internet, however, seems divided about the ethics of using a deceased person’s voice to create fake conversations. In one famous post, this possibility was called “a rather straightforward evil act.”

Others, however, are excited about what this means for the future of AI technology, while others are concerned about blurring the boundaries between what is real and what is fabricated.

This is not the first time AI has caused controversy; as a result of the popularity of Dall-E, some artists oppose this tool, predicting a future in which programs will replace employees to create concept art at the click of their fingers.

If you receive this SMS from Seur delete it