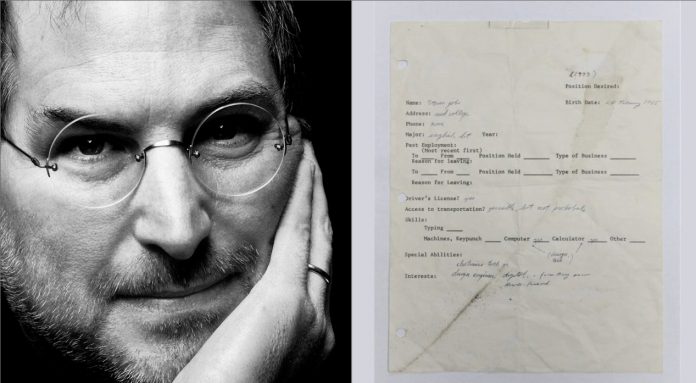 The job application, filled in by Apple co-founder Steve Jobs in 1973 and previously sold for over $ 175,000, is auctioned off as a rare piece of Jobs memorabilia.

The auction will be held for a one-page application sheet consisting of a form filled out by Steve Jobs. The half-filled page with half-blank items contains information on Jobs’ interests and areas of experience.

Job application goes back to Apple

The letter, which dates back to his joining Atari in 1974 and establishing Apple with Steve Wozniak in 1976, provides a list of information such as Steve Jobs’ interests, areas of experience and address.

In the letter that Steve Jobs filled in some parts and left parts blank, it is seen that he wrote to Reed College in his address. On the other hand, Jobs answers the transportation question “possible but not possible”.

Jobs lists his interests as “electronics technology or design engineer”. Leaving his past employment status blank, Steve writes that he has experience with computers and calculators.

The application form is still in very good condition, according to the Charterfields auction listing. However, there are “wrinkles, light paint and old transparent tape on the upper edge” at some points.

As with other Steve Jobs commemorative auctions, the signed job application is expected to find buyers at a high price.

Finally, let’s say that the auction will start on February 24 and will continue until March 24.

“What Does Bitcoin Do?” The answer to the question came from...

Bitcoin Will Stay To The Poor