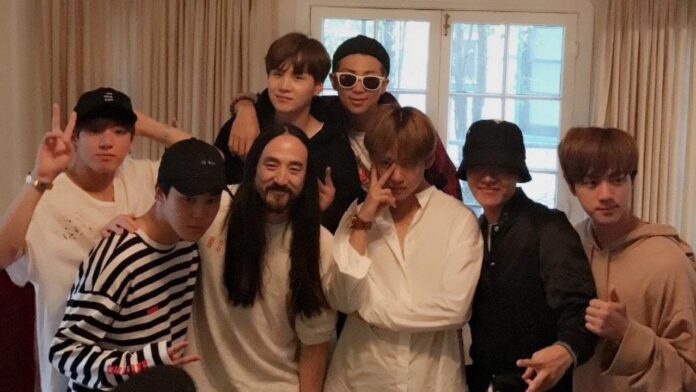 The American DJ talked about the impact of BTS in the world and how they have put their country on top.

In addition to the love of music, another thing that unites Steve Aoki and the boys of BTS is pride in their roots, both stars admire and respect each other.

The DJ Steve Aoki was invited to talk about their success in the program ‘Good Morning America ‘, where he thanked the i cones Asians and Asian Americans who have succeeded in entertainment .

He commented that several figures have broken great barriers for many years, such as his father Rocky Aoki , actor and martial arts specialist Bruce Lee, designer Hiroshi Fujiwara, as well as activist Yuri Kochiyama.

Steve Aoki spoke especially of BTS , saying that RM, Jimin, Suga, J-Hope, V, Jungkook, Jin and Suga were very successful in the American music market thanks to their effort, work and talent, the DJ reflected: ‘The band South Korean has taken over the world with his music, dance steps and charismatic personalities ‘

The creator of the track ‘Are You Lonely’ concluded: ‘I not only see them as incredible musicians and artists as great Asian voices within the music that have opened the doors to other Asian people’.

‘On Their Shoulders’: Why Steve Aoki is thankful for Bruce Lee and BTS l GMA Digital

Recently the successful collaborations of the idols and the musician filled the online Fortnite concert ‘Party Royale’ with good energy, thousands of fans were able to enjoy the tracks ‘Waste it on Me’ and ‘Mic Drop’.