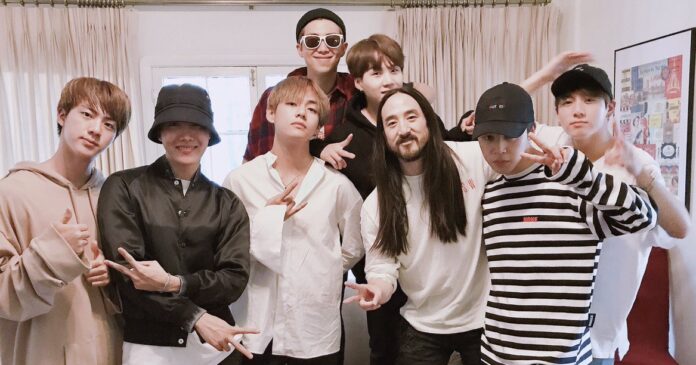 Steve Aoki revealed that he greatly admires RM for his manner of communicating with the public. Steve Aoki spoke about the great inspiration that BTS is for him.

The BTS guys have collaborated with a very impressive number of international artists and always make alliances with the most recognized musicians of the guild, one of these figures is the American DJ Steve Aoki.

The creator of songs like ‘I Love You When You Cry’ worked alongside BTS on famous songs like ‘ Mic Drop’ and ‘Waste it on Me’. The idols of Big Hit Entertainment feel a great connection with Aoki by the way that connects with music and how you use your tracks as a means of expression.

On multiple occasions Steve Aoki has revealed what BTS means to him, the DJ has great respect for the K-pop band for their unique style that will impact their fans and for being great representatives of the Asian community in the world.

Through his account Twitter , musician EDM reiterated his admiration for RM , the DJ gave a message very sincere dedicated to the leader of BTS , Steve Aoki wrote in his post:

“Rm u the realest fr my brother. Ur words are inspiring “

Fans of both stars left all their love in the publication, which so far has more than 238 thousand likes and more than 63 thousand retweets, netizens responded with great affection to Steve Aoki.

Rm u the realest fr my brother. Ur words are inspiring @BTS_twt

BTS members recently released a special playlist for their 7th anniversary, the list features the 50 songs that the K-pop group considers to have marked their career on stage.