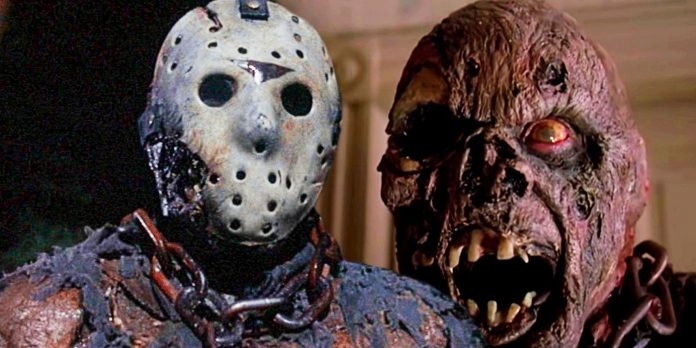 Iconic horror writer Stephen King’s proposed Friday the 13th novel “I Jason” will likely never happen, but the book is one of the only original takes on the slasher franchise that could have potentially reignited interest in the series. While later entries into the sub-genre relied on meta-humor and self-referential twists, the Friday the 13th franchise was not originally the most complex slasher series. Although Jason Voorhees is beloved by many fans of classic corny horror movies, the character is not a complicated figure who necessarily needs an in-depth backstory and much of his appeal comes from his brutal, uncomplicated efficiency.

However, author Stephen King revealed that he once intended to write a novel that would have built on the mythos of the long-running slasher series, and his take on Friday the 13th franchise’s backstory sounds more intriguing than the upcoming It prequel TV series. According to a 2020 tweet by the best-selling author, King wanted to write a Friday the 13th novel titled “I Jason.” The pitch for the book is a killer one, even though issues with the rights of the Friday the 13th series mean that the novel will likely never see the light of day.

Related: How Friday the 13th Helped Shape The Scream Franchise

As pitched by King, “I Jason” was exactly what the title made the novel sound like. A Friday the 13th retelling from Jason’s perspective, “I Jason” would have reimagined the slasher series by depicting the villain’s experience of repeatedly dying and being resurrected in Camp Crystal Lake. However, King never even tried to pursue the pitch, presumably because the Friday the 13th franchise’s rights are entangled in an ongoing legal nightmare, meaning fans may never have seen this trippy retelling even if King did finish a draft. This is a shame as, like the proposed Pamela Voorhees prequel, this Friday the 13th spinoff could have reinvigorated the tired franchise.

According to King, “I Jason” was intended to be a retelling of the Friday the 13th series from Jason’s POV. While slasher movies temporarily inhabiting the POV of their villains is not unusual, the sub-genre does not usually focus on the perspectives of its killers when it comes to storytelling. The POVs of Jason Voorhees and Michael Myers are shown while the murderers do their killing, but the majority of the movies take place from the perspective of their Final Girl heroines. Instead, “I Jason” would have focused on Jason’s POV throughout the story, going in-depth in its depiction of his experience of repeatedly being killed at the end of each movie, only to be revived by the next sequel. Even the Friday the 13th remake’s Jason origin story didn’t go near what King characterized as this “hellish, existential fate,” with the author promising that the novel would have been an unsparing deep dive into the psychological implications of Jason’s bizarre existence as a revenant.

Why King’s Friday the 13th Novel Would Work

The Friday the 13th series has never answered the question of what Jason’s horrible, unending existence is like for him, and a retelling that focuses on his perspective could reshape the series. The movies have vacillated on what exactly Jason even is, with some sequels treating him as a revenant, some calling him a straight-up demon, and some depicting him as more of an existential force of nature (or emotionless embodiment of evil, like Michael Myers). However, these answers never satisfying as, for all of the Friday the 13th franchise’s many Jason Voorhees forms, the character’s famous canon backstory gives his evil acts a reasonable justification. Jason was drowned due to the negligence of camp counselors in his youth, making his killing sprees understandable (if not justifiable) and making the character less of an unknowable figure than Michael Myers. He is ultimately a more understandable, empathetic figure than Michael, which makes a story from his perspective all the more compelling.

Why “I Jason” Will (Probably) Never Happen

The legal quagmire that the Friday the 13th franchise’s rights are currently embroiled in would likely prohibit King’s project from ever being released. The series cannot produce a new movie, novel, or TV show until the creators end their protracted argument over who technically owns the rights to the Friday the 13th franchise title, Jason Voorhees, and the original movie. Not only that, but King has not yet written the novel and has never claimed that he plans to. Furthermore, It’s knotty backstory (including a turtle that vomited up the known universe) proves that King’s attempts at existential cosmic horror can sometimes fall flat with audiences and get a bit too ambitious in their scope. The idea of Jason reliving his hellish fate over and over is a chilling one but, to function as a satisfactory standalone novel, “I Jason” would need to explain what was happening to Jason and why he was trapped in this cycle. This could devolve into weird fantasy fast and could easily betray the simple slasher movie thrills that define the Friday the 13th franchise as a whole, losing the tone of the series thanks to unnecessarily complicated lore.

Could Stephen King’s “I Jason” Save The Friday the 13th Series?

As a revolutionary new way of looking at the Friday the 13th franchise, “I Jason” could have the potential to reignite interest in the series. Fear Street 1978 (which was inspired by both Stephen King and Friday the 13th) proved that slasher movies could tell trippy, ambitious time-traveling stories while still maintaining their brutal, bloody edge, and “I Jason” could potentially be a classic addition to the franchise if the novel held on to the tone that made the original movies so successful., While some of King’s works have gotten lost in their self-involved complexity and attempts at profundity, plenty of the author’s writing is brutally efficient, violent horror in the vein of the best Friday the 13th movies. Thus, if the author could keep his vision limited to the classic slasher franchise, Stephen King could make “I Jason” the project that brings Friday the 13th back into the public consciousness (provided the legal battle holding up the series finally reaches an end).

The first footage of Persona 5 Xbox gameplay has appeared