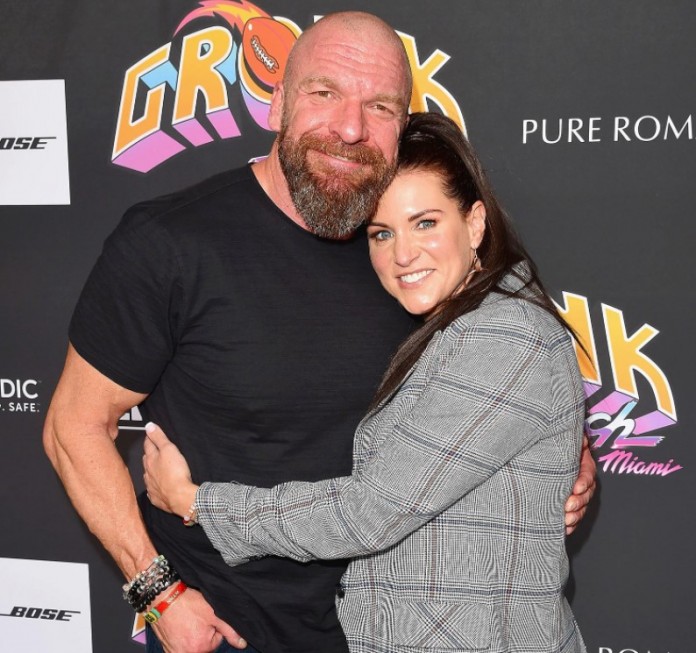 “My eldest daughter has already started training, and I encourage them to follow their passion and what they believe in while they work hard at it,” McMahon said of Aurora, born in 2006, who followed in their footsteps during an interview on Fox. Sports’ First Things First in October 2019. “I believe in a strong work ethic and I believe that they can do whatever they want in the world, but they will have to believe in themselves and work hard.”

“My new “mom’s” ring is made up of my four most precious gifts that life has given me, my three girls and their father,” the athlete, the daughter of WWE CEO Vince McMahon, wrote via Instagram in May 2019, showing off her new trinket. “Happy Mother’s Day to all moms in the world!”

Before becoming a loving mom, Stephanie married a retired professional athlete in October 2003, despite her father’s early hesitations.

“[Triple H] was very flirtatious [and] hinted,” the Connecticut native recalled during an interview on the Howard Stern Show in 2002. “It was a very sensitive situation; he was flirting with me, and I know that in our business I am forbidden to meet with any of the wrestlers.”

In addition to her parenting duties, Stephanie worked for WWE as a business executive and on-camera talent before taking a step back in May 2022.

“Starting tomorrow, I’m taking a leave of absence for most of my duties at WWE,” she tweeted at the time. “WWE is a lifelong legacy to me, and I’m looking forward to returning to the company I love after taking this time to focus on my family.”

Triple H, for his part, announced his retirement from the ring a few months earlier after he suffered heart failure during viral pneumonia in September 2021. Stephanie took him to the hospital after noticing he was coughing up blood and doctors found fluid. in the lungs and around the heart.

“I was nose diving and was kind of on the 1-yard line where you don’t really want to be, for the sake of your family and your future,” the WWE executive vice president recalled during an appearance on ESPN’s “First Take” in March 2022. .

He added: “We have 3 girls… Suddenly I come home and get a little sick, and their dad, who is always strong, suddenly finds himself in the hospital. I do not know if they understood the consequences of this. But there are times when you are exposed for all sorts of nonsense, and you think: “Is that all? Do you wake up from this?” It’s hard to swallow and makes you think differently.”

Fortunately, doctors were able to save the five-time world heavyweight champion, however, he stated that the defibrillator in his chest does not allow him to ever enter the ring again.

Scroll below to see pictures of Stephanie’s brood and Triple H:

Aurora, Murphy and Vaughn hugged their mom on Mother’s Day, giving her a handmade postcard.

“I couldn’t have dreamed of a better father for my children,” Stephanie said of her husband on Father’s Day. “Thank you for always being there with your shoulder to cry, play dress-up, paint your toenails, show them how to train, for always listening, being spectators at fashion shows, teaching them how to overcome their fears. and for hugging them with your big arms when they need it most. ❤️ ❤️ ❤️

In the context of the coronavirus pandemic, Stephanie’s girls took up home schooling without getting up from the kitchen table.

The girls gave Triple H a series of kisses in a cute picture on Instagram.

Stephanie took her daughters to watch their father’s WrestleMania fight over Easter weekend.

Triple H was cuddling with one of his babies.

Aurora, Murphy and Vaughn watched the sunset during a summer boat trip.