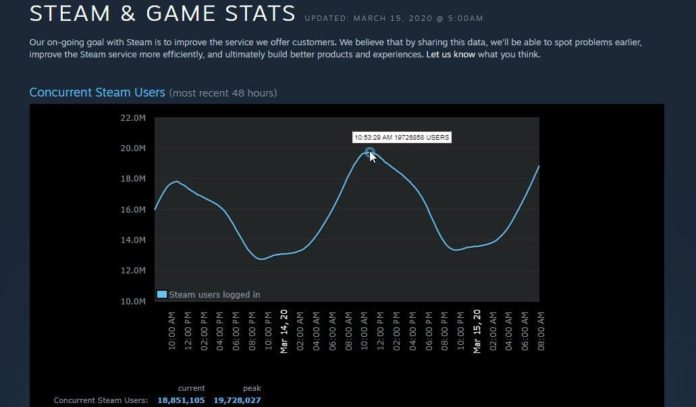 Steam, one of the most popular online gaming platforms, broke the simultaneous player record on Saturday. The online game store beat its previous record, which it broke in February, with about 1 million people.

Steam, which is one of the first platforms that come to mind when it comes to online gaming platform, broke the record of the player who was simultaneously on the platform yesterday. According to Steam’s in-house game statistics page, on Saturday (14/03/2020) Turkey on full-time active as of 17:00 19,728,027 player Steam in the vicinity.

The platform broke the previous simultaneous player record again this year. Steam’s previous record was broken in February 2020, and 18,801,944 players were active on the platform at the same time. Steam has advanced almost 1 million players in this.

The reason behind Steam breaking its new record may be the Corona virus, which causes quarantine implementation in many countries. In these days when collective events are canceled and there are exemptions for people not to leave their homes, people find plenty of free time to play. You can reach the statistics about Steam from here.