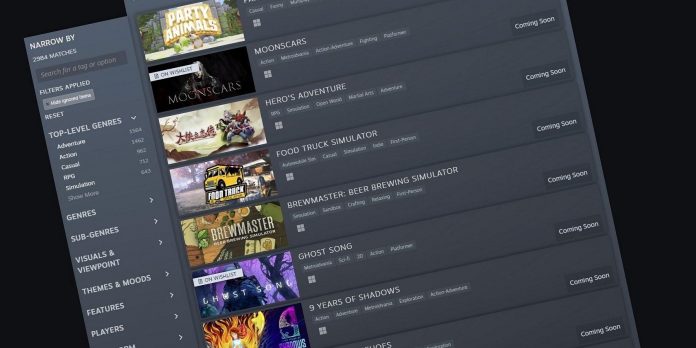 Now Steam has received a full set of updates that significantly improve the user experience when shopping and browsing, including new tags, genre highlights and information centers. As Valve’s PC gaming platform grows and more and more games are added to it, the discovery issue is becoming a major issue, and updating the storefront should help in this regard.

Namely, Valve provided the latest batch of updates for Steam as part of its experimental “Lab” feature, where users could test some of them in a relatively controlled environment. However, now all Steam users have immediate access to a significant list of improvements to detect and simplify usage, such as the addition of genre hubs, game summaries, powerful sorting tools and filters, and much more.

This time, Valve has focused on deeply personalized recommendations and highlights, and Steam should now be able to more correctly choose the type of content that may interest the user. For example, whenever someone interacts with any Steam hub, said hub will provide recommendations based on their gaming track record. This is due to some of Valve’s other ongoing projects, in particular the Steam Year in Review user page, which may appear closer to the end of 2022.

Apparently, Valve is experiencing a Steam renaissance in 2022. The company has not only introduced the aforementioned set of updates for its main gaming client, but is also working on improving the Steam mobile app. Most likely, a visual update of the store may be required in the future, since its game-oriented Big Picture mode should receive a new user interface similar to the Steam Deck or SteamOS interface in general.

However, in terms of improving the quality of life, Steam still has a long way to go with some of its more specialized features. Namely, Valve recently had to ban Steam Curator accounts for cheating developers out of game keys, which turned out to be a particularly egregious can of worms. Despite the fact that the curators in question were banned, it is likely that this simply scratched the surface of a system that seems ripe for such cases of abuse.

Although Steam is by far the company’s most notable project, Valve is also developing several games, according to one of its designers. It’s hard to say if any of them will appear on Steam in the near future, but it’s likely that updates like those described in this article will be easier and faster than a brand new Half-Life game. For example.

Chanyeol reveals the hardest part about acting on The Box