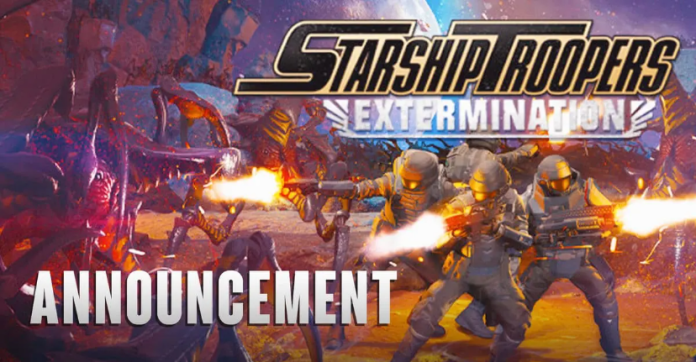 Offworld Industries, the studio that created the tactical FPS Squad, has just announced a new game based on the 1997 sci-fi movie. Earlier they announced Starship Troopers: Extermination, and also showed the announcing trailer.

Starship Troopers: Extermination is an upcoming PvE first-person shooter for 12 players. He throws a squad of 12 players into the heat of battle, where they must shoot down hordes of bugs that are coming at them. In a team of 12 people, each player has their own responsibilities that they must fulfill. These duties can range from protecting the base, collecting resources, completing tasks, or simply destroying all bugs in sight.

The game has a class system where players can choose which role they would like to play. Currently there are three game classes: Assault, Support and Defense. The Assault class is more focused on providing the group with firepower. On the other hand, the support class is designed to treat the health of teammates, and the defense class is designed to protect and hold the base when bugs attack it.

There is also a class development system where players can unlock new weapons, equipment and perks. By supporting the squad and fighting the threat of bugs, players will become stronger by unlocking them. This class progression also allows players to customize classes according to their play style.

The game also has a resource system in which players must collect resources from refineries on the planet. Players will then use them to strengthen their defenses. These resources can also be used to create designs that can increase players’ firepower.

The game does not save on enemies, as there are several types of enemies that players will face. Bugs also get stronger as players continue to complete missions.

All this takes place on a large-scale map with unique zones that create a feeling of planetary war. Because of the huge map, the game features a ping system that helps players communicate effectively with each other on the field.

Starship Troopers: Extermination will be released in early access in 2023.

The First Look At Red Sonja Reboot Is Here, And I...