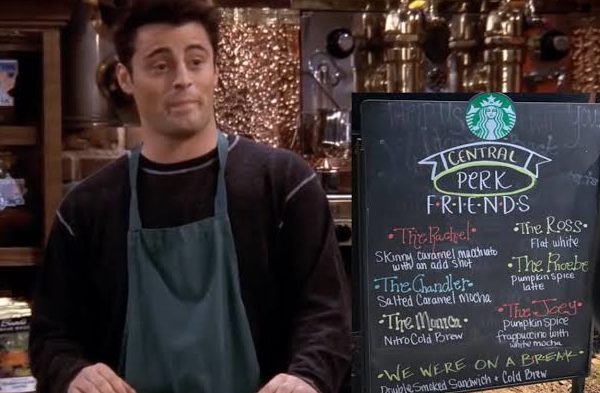 The latest trend is a Starbucks “secret menu” of drinks inspired by the characters who starred in the show. The orders are not official – the coffee network has not officially released the recipes. Even with all the “buts”, the joke can be fun for fans of the 2004 TV attraction. The news is also making a big hit on US social networks.

Most of the orders, which were found on the Totally The Bomb blog and reproduced on the Bustle site, are exclusive to certain Starbucks locations and are not on the official coffee shop menu. Even if the drinks are not for sale in the establishments, it is possible to ask the barista to make minor changes. That is, you will not be able to order drinks by name. It’s no use asking for a “The Phoebe” and waiting for the attendant to understand what you’re talking about. Instructions must be given to employees to make the right request, which is inspired by the personality of each of the characters. 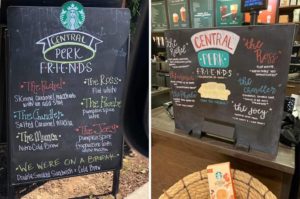 However, you don’t have to worry: the drinks are simple and don’t need much customization. No need to make the barista anxious, okay? The orders offer a mix of two Starbucks known recipes. Are you curious? This is what you should ask:

The ross
The drink inspired by David Schwimmer’s character is quite simple: a Flat White – the order appeared on Starbucks Brazilian menus for the first time in 2016. It is prepared with shots of ristretto coffee, a layer of velvety steamed milk and finished with a dot. Marked with art latte. Feeling a little bolder? Order a Blonde Flat White. “The drinks are predictable but sophisticated,” says the description of the order – which also fits the character. Did not find the news in Brazil? Just order a simple latte.

The monica
The publication recommends a Nitro Cold Brew to represent Ross’s sister and chef – it’s a combination of traditional Cold Brew and nitrogen, creating a smooth, creamy texture. The request is available at some units in São Paulo, such as Guarulhos International Airport and MorumbiShopping’s Starbucks. Did not find the request? Monica can also be represented by a simple black coffee with an extra dose of espresso.

The joey
The character-inspired drink is easy to find in Sao Paulo: just order a Pumpkin Spice Frappuccino. Want to make the request even more exquisite? Piece with White Mocha. Other options are the “Cinderella Latte” or also a “Cap’n Crunch Frappuccino”. All recipes can be found on Starbucks ‘secret menu’ website.

The chandler
The ironic character is represented by a Salted Caramel Mocha – and also by Cold Brew with Milk. The second recipe is made with two (or more) shots of iced espresso with some milk and some of Starbucks traditional sugary syrup. Called Doubleshot On Ice in the United States, the request can be easily recreated in Sao Paulo.

The phoebe
The order is made with Green Tea Latte – but made with coconut milk – or a Pumpkin Spice Latte. Both requests are easily found in Sao Paulo. All drinks could be that easy, right?

The rachel
It is represented by a Caramel Macchiato – but it is necessary to ask to add a shot of espresso in the order. Looking for something more lush? Order the icy version of Caramel Macchiato, only upside down. The traditional recipe starts with vanilla syrup, milk and ice. Two espresso shots are added next, with a little caramel syrup on top. The inverted version begins with the caramel at the bottom of the glass, followed by espresso, milk and ice, and finished with vanilla syrup.

A Canadian store also created FriendsFrappuccino. The barista responsible for the unusual creation revealed that the recipe was “inspired by Monica’s purple apartment,” as well as the iconic orange sofa at the opening of the show. The order, however, will be more difficult to find in Brazil, so the tip is for those who are going to travel: just order a “Raspberry Crème Frappuccino”, beaten with a spoon of “dragonfruit”, with some Pumpkin Sauce added to the bottom of the glass. You can also order a Vanilla Bean Crème Frappuccino with a touch of raspberry syrup.

Sought, Starbucks Brazil issued a statement about unusual drinks: “We love to see the creativity of our partners (baristas) and customers. While we have seen some partners creatively describe drinks in their stores, some of the drinks you refer to are items and customizations in Starbucks permanent menu. If customers want to order any of these drinks, we recommend that they know the name of the drink as it appears on our menu so that the barista can make it perfectly. ”