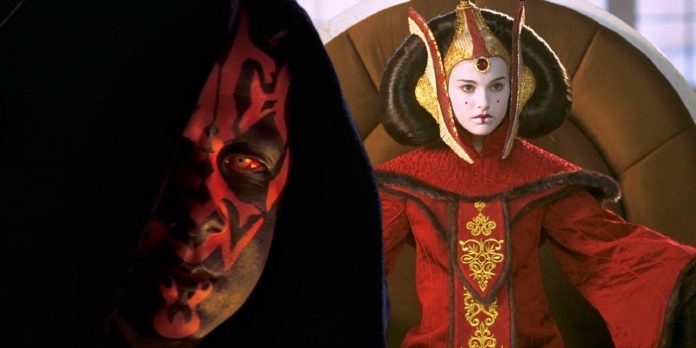 Darth Maul tracks down Queen Padme Amidala and her companions in Star Wars: Episode I — The Hidden Menace, and although his method is implied in the film, he may have found them with the help of the brutal power of the dark side. The Sith turn exclusively to the dark side of the Force for their power, using its corrupted energy to gain unnatural abilities. While the Jedi tune in and use the Force while at peace with the natural galaxy surrounding them, the Sith harm others and sow suffering in their eternal quest for power. The brutal occupation of Naboo by the Trade Federation could perfectly play into the hands of Darth Sidious and Darth Maul, allowing the Sith apprentice to find his targets on Tatooine.

Darth Maul was one of the last Dark Lords in the Sith lineage of Darth Bane, and therefore was privy to the history of countless generations of Sith and deadly dark techniques. In Legends, Darth Maul was much more focused on the combat aspects of Sith training, serving mainly as an enforcer and assassin of Darth Sidious before his death on Naboo. In the canon, Maul’s backstory and appearance were changed: “Star Wars: Clone Wars” retroactively forced him to survive the “Hidden Threat” and become a deadly third party in the titular war, seizing control of the Death Watch and founding an extensive network of criminals called the Collective of Shadows. The canonical history of the Mole shows that he was able not only to fight, demonstrating vile manipulation skills, like his master.

Darth Maul’s special method of tracing Padme’s path to Tatooine was explained in the 2012 novel Darth Plagueis, which coincided with both the subtext of the “Hidden Threat” and his almost exclusive attention to the military side of Sith domination. No specific explanation is given in the canon, other than Maul’s reference to the trail leading him to Tatooine. The term may refer to technological means, but given Maul’s more diverse skill set in the canonical timeline, he could easily use a more arcane and violent type of trail to find the Queen. The holographic message of Sio Bibble pleading for help in response to the atrocities of the Trade Federation could very well be real in the canon, allowing Darth Maul to track down Padme, following a trail that users of the dark side can follow more skillfully than anyone else: the suffering of sentient beings.

Darth Maul’s Trick from the Dark Side to Find Heroes

As Yoda warned the young Anakin Skywalker in The Hidden Menace, fear is the path to the dark side, and suffering is the last step in this dark journey. Indeed, Anakin lost his mother, wife, most of his body and his ideals in the process of becoming Darth Vader, turning a once kind-hearted man into a mechanical monster who imposes an authoritarian regime. Darth Maul, raised by Darth Sidious (and born Dathomir’s Night Brother in the canon), is very familiar with suffering as a Sith Lord and could have followed the “path” of suffering to find Padme on Tatooine.

As shown in the very first Star Wars movie, the suffering of the mind causes unrest in the Force, and the destruction of Alderaan by the Galactic Empire deeply disturbed Obi-Wan Kenobi, a former Jedi master and general in the Clone Wars, who experienced a considerable share of suffering on the battlefield. For the Sith, who revel in such horrors, the deadly persecution of the inhabitants of Naboo by the Trade Federation through starvation and other deadly means would be a torment for Queen Amidala and her comrades, who learned from the transmission of Sio Bibble. Darth Maul could trace these feelings through the dark side of the Force and trace the “smell” to Tatooine.

Other Sith who use suffering to find their enemies

The “Hidden Threat” won’t be the only case where Sith lords use suffering to find or lure out their enemies. In The Empire Strikes Back, Darth Vader tortures Luke Skywalker’s friends in Cloud City, tormenting novice Jedi until he goes to Bespin to save them, despite knowing that this is a trap set by Vader. Along with the false message of returning to Coruscant, Darth Sidious, now Emperor Palpatine, uses the mass killings of Jedi across the galaxy during Order 66 to attract survivors to their deaths in the Jedi Temple, which is teeming with brainwashed clone troopers in Star Wars: Episode III – Revenge of the Sith.

After his return to the canonical universe, Maul uses the transmission of suffering to lure out his enemies during the Clone Wars. On Raydonia, Maul killed countless civilians until Obi-Wan went to the Outer Rim to fight his old enemy. Maul used a similar strategy at the end of the war, oppressing the people of Mandalore in hopes of opposing Obi-Wan and Anakin, but to his surprise, coming face to face with Ahsoka Tano.

How Money Heist: Korea Connects with the Original Show

New She-Hulk Images At a Glance Give a Better Look At...