Home Entertainment Star Wars: The Galactic Star Cruiser had to be evacuated to Disney... 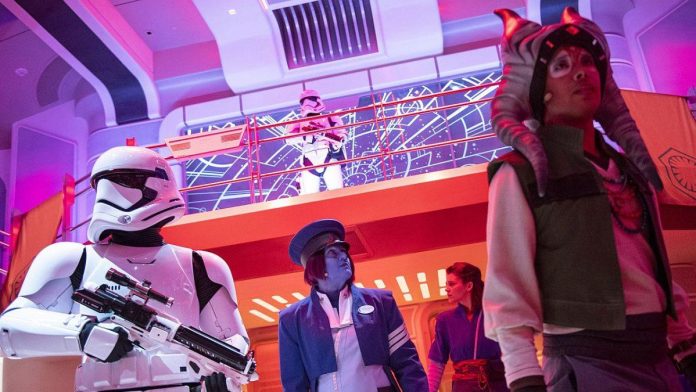 Star Wars: Galactic Starcruiser is something new that we’ve never seen before. Some call it the “Star Wars Hotel”, it’s more like a separate theme park, but you can live in it for two nights, with an interactive story that you can become a part of. This is the most exciting themed entertainment as it really makes you feel like you are inside a galaxy far, far away. However, now I have dispelled the illusion, and if you continue, you may suffer the same fate.

Yesterday, it seems something went wrong, and Star Wars: Galactic Starcruiser had to be evacuated. The evacuation lasted only about 30 minutes before the guests were allowed back inside, but one guest posted photos of the evacuation on Instagram, and it turned out that Halcyon is… just a building with ordinary stairs? How can you get back inside now?

Of course, Star Wars: Galactic Starcruiser is just a building, you don’t actually travel to space, but Walt Disney World hides this fact so well that viewing these images actually shocks the system a bit. Most guests get to Starcruiser by “transport shuttle”, and the building itself is almost completely closed. There are no windows outside, only screens showing fields of stars. All of this goes quite far to make you really feel like you’re on a starship.

If you’ve ever been to the Space Mountain or any other attraction when the attraction stopped working and the lights came on, you probably had a similar impression from viewing these photos. Somehow, what you create in your head about how it all looks is destroyed when reality opens up. And the problem is that the next time you ride Space Mountain, you won’t be able to forget what you saw. For many, this really spoils the overall impression.

I sincerely wonder if those who survived this evacuation and really immersed themselves in the narrative of the “Battlestar” will be able to easily return to this after they had to evacuate and return to the “real world” for some time in the middle of their lives. stay. Of course they knew the real world was there, but now they actually saw it.

In the end, it shows how good Walt Disney Imagineering is at its job. Star Wars: Galactic Starcruiser is really just a big gray building on the outside, but a lot is hidden, allowing the Star Wars story to come out and really let you embrace it. Now just pretend you’ve never seen reality.

Xbox is making big changes to its user interface